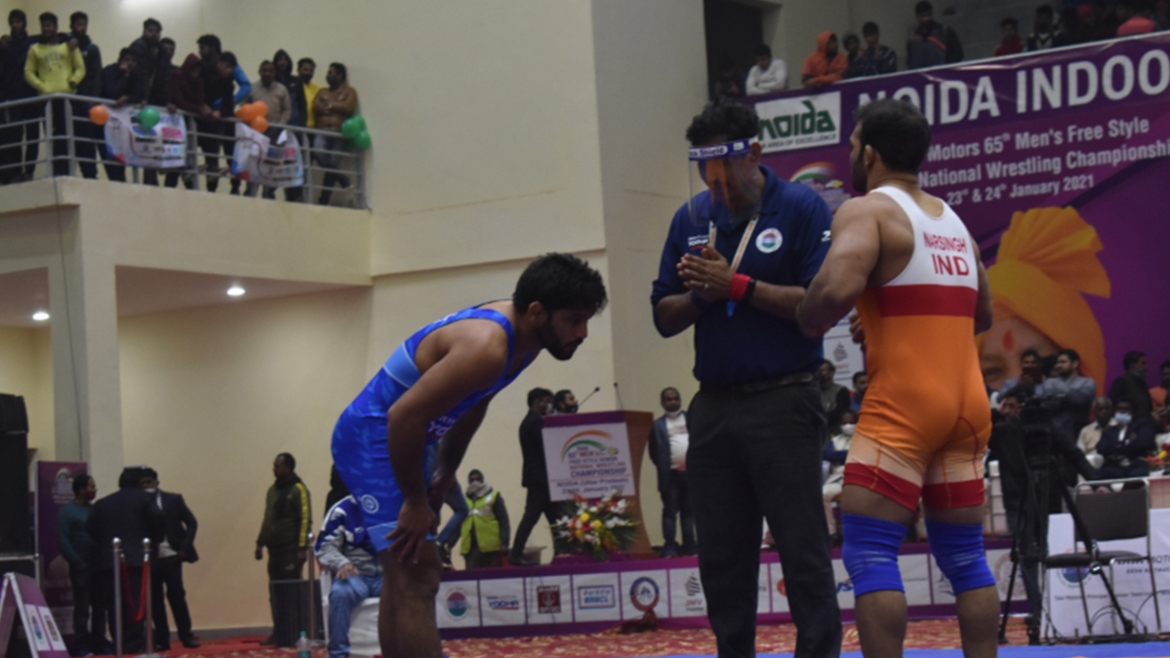 Wrestling National Championship:  Narsingh Yadav’s tryst with controversy continued as he marked his comeback to Senior Men’s Freestyle National Championship in 74kg on Saturday. The former World Championship bronze medallist was the poster boy of day one so much so that the Wrestling Federation of India (WFI) President Brij Bhushan Singh came down to the mat to give him his blessings. Interestingly, it did work in his favour. Narsingh announced his return in style, beating young Gaurav Baliyan in 1 minutes 42 seconds. But it was his match against another veteran Amit Dhankar, who was representing Haryana, that became the talk of the evening.

The middleweight category was heavily loaded with Indian wrestling superstar. Five wrestlers — Praveen Rana, Jitender, Narisingh, Dhankar and Gaurav Baliyan — were competing to stake claim to the coveted top spot. The winner would get a chance to prove his mettle at the Matteo Pellicon Rome Rankings starting from March 4 to 7.

Narsingh was the favourite to reach the final, however, his journey came to a halt in the pre-quarterfinals. Riding on the back of a dominating performance in the qualification round, the 31-year-old was the bookies man to win the bout. And he did not disappoint, ending with a lead at the end of the first half. However, it was the final half where the real drama ensued.

Leading by a lone point until the final 20 seconds, Dhankar switched to offensive mode, to even the tally and win the bout on technical criteria. This took Narisingh by surprise, who was let struggling and trying to buy time. In the dying seconds, Dhankar, however, managed to expose his opponent’s chest — or as it seemed.

The match referee had awarded no points, only to be challenged by Haryana’s coach. After analyzing the clip, the decision was overruled and Dhankar was awarded two points, winning the game 3-2.

In a video recorded by one of Narsingh’s supporter, it seemed that the time was over by the time Dhankar initiated the move. The former along with his coach Jagmal Singh approached the WFI President Bhushan with the evidence. However, it did not help their case. The President said the jury is the final authority and nothing can be done about it. “We showed the clip to President Sir, but he said the referee is the final authority and nothing more can be done,” Jagmal had said.

What does the future hold for Narsingh Yadav?

Returning home without a medal, Narsingh will have to leave the men’s national camp at Sonepat. According to the WFI rules, the top four wrestlers at the championship are allowed to join the training camp. “For now, it is unlikely he will be part of the camp as he did not get any medal. We gave him a fair chance but he could not replicate it. Now, he has to wait. We might call him back if someone decides to withdraw,” WFI assistant secretary Vinod Tomar said.

Notably, the Varanasi-born also loses a chance for another international competition. “As per the rules, we give champions at the nationals an opportunity to represent India at least in one international tournament. He has lost it,” Tomar added.

However, all is not lost for Narsingh as he still has one final shot to stake his claim in the 74kg. WFI plans to hold the Olympic Qualifiers in March and if he wants he can participate in it. “We will give everybody a chance at the trials. And as 74kg is the most competitive it will be interesting who gets the top spot,” Tomar said.