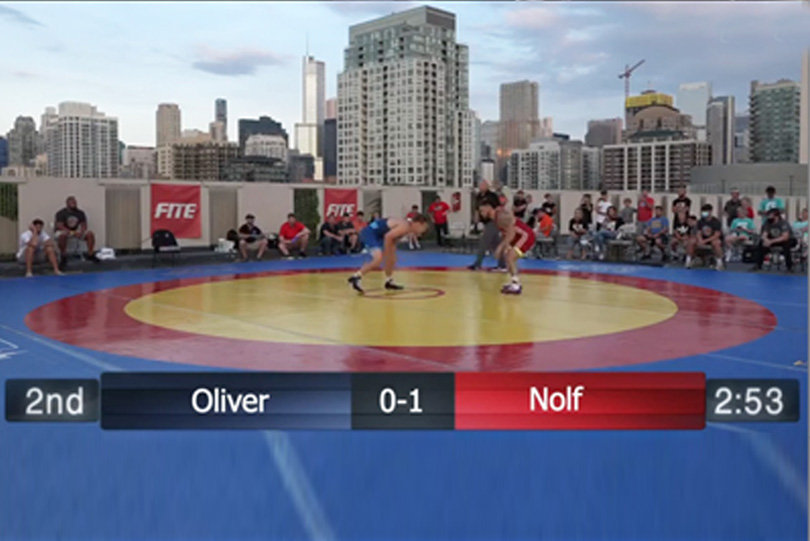 Wrestling News: After a long wait, wrestling action returned on Sunday when three-time NCAA champion Jason Nolf and former Junior medallist Jordan Oliver locked horns in the main event of Rumble On the Rooftop. Nolf led 1-0 after the first period when Oliver was put on a shot clock and could not score. Early in the second period, Nolf was put on the shot clock and did not score, making it 1-1. Later in the period, Oliver was again placed on a shot clock and did not score, giving Nolf a 2-1 advantage. Nolf scored a takedown in the closing seconds as Oliver tried to force a shot, and finished with the 4-1 victory.

Nolf won three NCAA titles for Penn State, while Oliver was a two-time NCAA champion for Oklahoma State. Both are top contenders for the 2021 Olympic Team, Nolf at 74 kg and O

Nolf won three NCAA titles for Penn State, while Oliver was a two-time NCAA champion for Oklahoma State. Both are top contenders for the 2021 Olympic Team, Nolf at 74 kg and Oliver at 65 kg.

“I think we can put on a better show than that. Three points, with no offensive points. It kind of stunk. I told him I want to wrestle him again sometime. Maybe we can set up a round two and get some points on the mat,” said Nolf.

A full card of challenge matches between Olympic-caliber U.S. athletes was held the roof of an undisclosed location in Chicago in front of no fans, broadcast live on Fite.tv.

In a Co-Main Event, in a battle of 2020 Big Ten champions and No. 1 ranked collegians at different weights, Pat Lugo of the Hawkeye WC beat Luke Pletcher of the Pittsburgh RTC, 5-0. Lugo, who wrestled for Iowa at 149 pounds, scored three stepouts and a second-period takedown to defeat Pletcher, who wrestled 141 pounds for Ohio State. Both lost their senior seasons when the NCAA Championships were cancelled.

“I felt good. I was strong. I respect him. We had a crazy season this year. We were both No. 1, with both of us not being able to wrestle. I respect him for coming out here to wrestle and put it on the line. That’s what it is all about,” said Lugo.

In a Co-Main Event, in a battle of two past U.S. World Team members competing in two styles, Greco-Roman Team member Joe Rau of the Illinois RTC beat Freestyle World Team member Pat Downey of the NJRTC, 9-4. They did one period in freestyle and one period in Greco-Roman, with no technical falls. The first period was Greco-Roman, after Downey won the coin toss and picked Rau’s style first. Rau got on top after a passivity call, then tossed Downey, followed by a gut wrench for a 9-0 lead at the break. Switching to freestyle, Downey scored a pair of ankle pick takedowns for four points, but Rau held off additional attacks.

“I wish I was in better shape to give you guys a better show. It was awesome to wrestle in front of Chicago. I took all of COVID off. I was living in my brother’s basement. I switched RTCs. I just started training again, but I couldn’t miss this opportunity. I wrestled in front of my high school coach, my club coaches and my coaches now. This is a dream come true. I am wrestling in my city and I won. It is pretty freaking awesome,” said Rau.

In an entertaining and very active match, Zane Richards of the Illinois RTC scored a late takedown to edge Zach Sanders of the Minnesota Storm, 13-11. Richards scored four points on a scramble, exposing Sanders, to lead 4-0. Another scramble led to a Sanders takedown to make it 4-2. Richards scored a reversal and exposure to make it 7-2, but Sanders came back with a takedown to close it to 7-4 at the break. Richards stretched his lead to 9-4, but Sanders secured two consecutive takedowns to tie it at 9-9. They traded takedowns to make it 11-11, but it was Richards who scored the final takedown with about 10 seconds left to secure the victory.

Dylan Ness of the Minnesota Storm used an explosive second period to defeat Nestor Taffur, who competes internationally for Colombia, 10-4.Ness opened with a 1-0 lead on a step out. Taffur finished a single leg to make it 2-1, then a gut wrench turn for a 4-1 lead at the break. In the second period, Ness got behind Taffur, then launched him out of bounds for a five point throw and a 6-4 lead. Taffur got onto a leg shot, but Ness secured a counter takedown for an 8-4 lead. Another single leg by Ness made the final score 10-4.

Nazar Kulchytskyy of the Minnesota Storm secured a 10-0 technical fall over Danny Braunagel of the Illinois RTC, then took off his shoes and placed them on the mat to announce his retirement from competition. Kulchytskyy, a past Freestyle Team USA member, has developed a wrestling club in Wisconsin and will focus on developing young athletes as a coach.

An early scramble gave both wrestlers two points, but Kulchytskyy came out on top and scored three straight gut wrenches. The exchange was scored 8-2 but was challenged, and officials gave Kulchutskyy four points on the takedown, followed with his three straight turns.

Mitch McKee of the Minnesota Storm opened the card with a solid 6-2 win over Nick Dardanes over the Illinois RTC. McKee opened the first period with a duck under takedown followed by a gut wrench, for a 4-0 lead at the break. Dardanes opened the second period with a double leg to close it to 4-2. McKee was controlling the action with his upper body throughout. A late shot by Dardanes was countered by a spin behind for the 6-2 victory. Both of these athletes competed at the University of Minnesota. McKee is a past Junior World silver medalist.

Two of the nation’s top high school girls, both from Illinois, competed in the featured women’s bout on the card. Mia Palumbo scored a variety of takedowns on the way to an 11-0 victory over Shea Reisel. Two of Palumbo’s takedowns were for four points. Palumbo is a past Cadet and Junior National champion, who was ranked No. 1 in the nation in the National Girls High School Rankings, while Reisel held a No. 13 national ranking.

There were two boys matches as part of the card, with wins coming from Manny Brown of Chicago BTS in the first match and Aaron Steward of Illinois in the second match.

The event raised funds for the individual athletes competing, their Regional Training Centers and Beat the Streets Chicago.