Wrestling News : Meet 3 in 1 wrestler, she is mother, doctor and now about to be Olympian 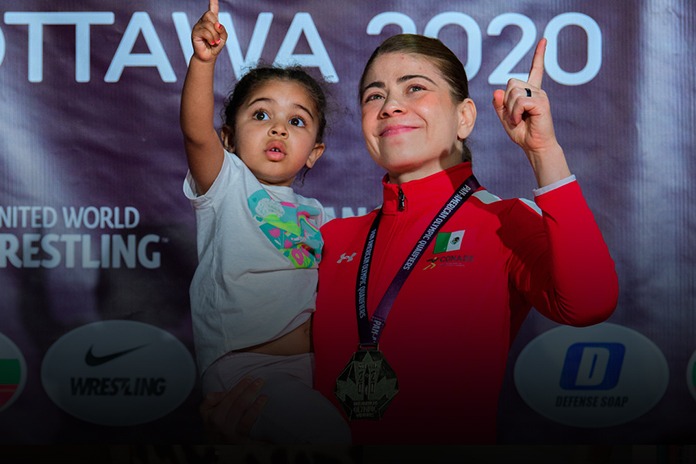 “My mom always taught me that if I worked hard, I would get to where I wanted to,” said Valencia. “Now looking at these successes, I think she was right.”

Where she wanted to go was always clear: mother, doctor, and Olympic wrestler. But getting to that point took sacrifice and patience.

“I started my studies in 2009 and finished my career in 2019. It’s usually six years from the beginning to the end, but I spent ten years because I stopped my studies for wrestling twice,” said Valencia.

Valencia graduated from Mexico’s Guadalajara Lamar Universidad medical school in the spring of 2019.

Now “Dr. Valencia” the scrappy 57kg wrestler is looking to earn her licenses to practice in Mexico and the United States. Her husband, 2012 Olympic silver medalist Jaime ESPINAL (PUR), is from Puerto Rico and getting licensed in America would allow her to practice in Mexico, the United States and Puerto Rico (an American territory). “It’s going to take me a long time. That process is going to take one or one and a half years,” said Valencia. “But after the Olympics, I hope to have enough money to pay for the paperwork and the test to get my license.”

After graduation, Valencia moved from Mexico to the United States to reunite with her husband and train at the Nittany Lion Wrestling Club under the tutelage of Olympic champions Cael SANDERSON (USA) and Jake VARNER (USA). Just over a year after returning to the mat, she became the first Mexican women’s wrestler ever to reach the Olympic Games after she won the Pan-American Olympic Qualifier at 57kg.

After falling one-match short of making it to the Rio Olympic Games in 2016, Valencia took a three-year hiatus before realizing she had something to prove to herself. In the midst of her retirement that featured life-altering milestones like getting married, birthing a child, and graduating from medical school, Valencia witnessed the success Natalia VOROBEVA (RUS) and Sofia Mattsson (SWE) had after giving birth.

“I looked at Vorobeva and Mattsson as examples. They went back after having a baby and were very good. This showed me that I can be a mom and still be good at wrestling,” said Valencia.

“I know that’s crazy, but something inside of me told me I needed to come back. I dreamed every night about getting back on the mat. You know, when you wrestle, you never really leave wrestling. It’s a part of your life.”

Valencia, who gave birth to her daughter Joy on May 31, 2017, returned to the mat for the first time in February of 2019 at the Cerro Pelado International. She lost to Amanda HERNANDEZ (CUB) and finished with a silver medal. Valencia’s second appearance came a year later in Ottawa, Canada, at the Pan-American Olympic Qualifier, where she needed to make the finals to punch her ticket to the Olympic Games.

Heading into the Pan-Am Olympic Qualifier, Valencia said, “Everyone wants to win the qualifier. I knew that [Olympic champion] Helen [MAROULIS] was going to be there, so I trained and prepared my mind to wrestle my best matches ever.”

The stage was set, and stakes were simple: win against Morias and go to the Olympics or lose and go home without an Olympic spot, just as she did in 2016.

Heading into the semifinals, Valencia told herself, “Believe in yourself, your preparation and just wrestle. Just have fun.”

In the semifinals, Valencia stopped an early open double-leg attempt from Morais with a counter-offensive throw. She snuck in an underhook on the Canadian’s right side and tossed her to her back for the early 4-0 lead. “I saw her wrestle before, so I definitely knew what she was going to try to do.”

In the closing period, Valencia halted a left side high crotch attempt and tossed Morais to her back again. But this time, she flattened the world champion for the fall. “At that moment, I didn’t think about what was coming. I just reacted; I relaxed, and my body reacted,” said Valencia.

With her win over Morais, Valencia became the first-ever Mexican woman to make it to the Olympic Games.

In becoming the first Mexican woman to reach the Olympic Games, Valencia hopes it shows young Mexican girls that they now have someone to look up to. “I didn’t have an example, so I made my own,” said Valencia.

“Right now, it’s a big opportunity. Before this, young girls in Mexico had Olympic dreams, but they didn’t have an example. They didn’t have someone to follow. Now that they’ve seen someone reach that goal, and can easily say, ‘I can qualify, too.'”

Valencia is continuing to prepare for the Olympic Games while training at the Nittany Lion Wrestling Club. She has aspirations of becoming an Olympic medalist but says winning an Olympic medal wouldn’t define her as a wrestler, wife, or mother. “Winning an Olympic medal is my goal right now. But, we’re more important than a medal and one medal doesn’t change your life. One medal can’t make you become a good person.”

In a message directed towards the wrestling community, Valencia said, “In these moments where we are at home, without knowing what the future brings us, I ask you to be patient and faithful. Be faithful that this will happen, and we will return to the mats to do what we are passionate about. Keep your mind busy on small daily projects and let’s live one day at a time. Stay positive, healthy, and above all things, focus on the goal waiting for us.”