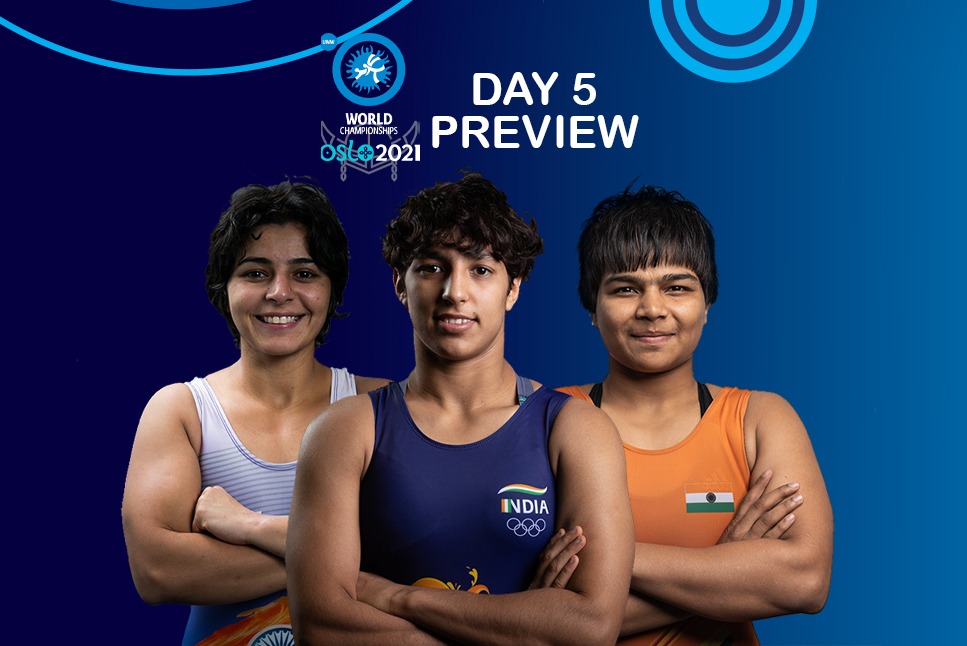 Wrestling World Championships 2021 Day 5 Preview: The youngsters in the Indian wrestling contingent will seek to gain big-stage experience in the absence of star players even as Anshu Malik’s performance will be followed keenly at the World Championships,

She now knows the kind of performance that is required and if she is able win a medal, she will firmly establish herself in the 57kg category.

Sarita Mor is also one of the most experienced wrestlers in the women’s squad. She is aware what it takes to win a medal at this level. She appeared strong during the trials.

She expectations will be high on Anshu Malik (57kg), who is the only wrestler at the prestigious tournament from among those who competed at the Tokyo Olympics.

Wrestling World Championships 2021 Day 5 Preview: She looked a bit rusty during the trials but the hard worker she is, the Nidani girl is expected to do well.

She has the strength and technique and it will be more of mental toughness or lack of it that will decide her fate.

She has won titles at the Asian level but World Championship is where she has always struggled. She has made five attempts at the senior level and once at the U-23 level but could never come close to the podium rounds.

Divya Kakran, after missing the Tokyo Olympics, must be eager to yet again prove herself. She will compete in the 72kg category instead of her usual 68kg,

Mensah Stock will now be leaping from the frying pan of the Olympics into the fire of the World Championships as she aims to defend her title in the women’s 68kg class, which gets underway Oct. 6 along with three other women’s divisions.

The Olympic weight class of 57kg will also get started, featuring Tokyo bronze medalists Helen MAROULIS (USA) and Evelina NIKOLOVA (BUL), as well as the non-Olympic weights of 59kg and 72kg.

Wrestling World Championships 2021 Day 5 Preview: Mensah Stock is confident she can maintain the intensity that propelled her to the top of the podium in her Olympic debut as she makes the three-month turnaround to get ready for Oslo.

“It’s definitely hard physically and mentally, just to get back on the mat…to get back on that train and really prepare yourself for the fact that the World Championships are just around the corner from the Olympics,” Mensah Stock commented in an interview by email.

“But at the same time, it’s a competition, just like the Ranking Series competitions, and you know, any other competition. We have them once a month anyway, so we’re already equipped for what was about to happen.”

Handling pressure, she says, it’s part of the job.

“Yes, the Olympics were extremely high mentally on pressure, but at the same time, we’re wrestlers and we’re equipped and prepared for the hardest battles.”

Mensah Stock, who will turn 29 four days after the medal matches on Oct. 7, said she had always planned to defend the world title that she won for the first time in 2019 in Nur-Sultan.

“I like to consider myself someone that is always improving so I don’t want to feel the pressure,” she wrote. “I’m here, enjoying the fact that I’m wrestling by the grace of God…I am just here to wrestle and wrestle the best that I can.”

She’s been doing that quite well since starting the sport in high school after reportedly being bullied on the athletics team. She continued the sport at Wayland Baptist University, winning two national championships.

On the global stage, Mensah Stock found her way onto numerous podiums, but missed out on the 2016 Rio Olympics and lost in the third round in her debut at the World Championships in 2017.

Wrestling World Championships 2021 Day 5 Preview: Her breakthrough came in 2018, when she won a bronze medal at the Budapest worlds, which she followed up with a dominant performance the following year at Nur-Sultan to secure spot at the Olympics for the U.S. That included a one-sided victory over Rio gold medalist Sara DOSHO (JPN) — which she would repeat at the Tokyo Olympics.