WWE Clash of Champions 2020: All 9 confirmed matches; all you need to know 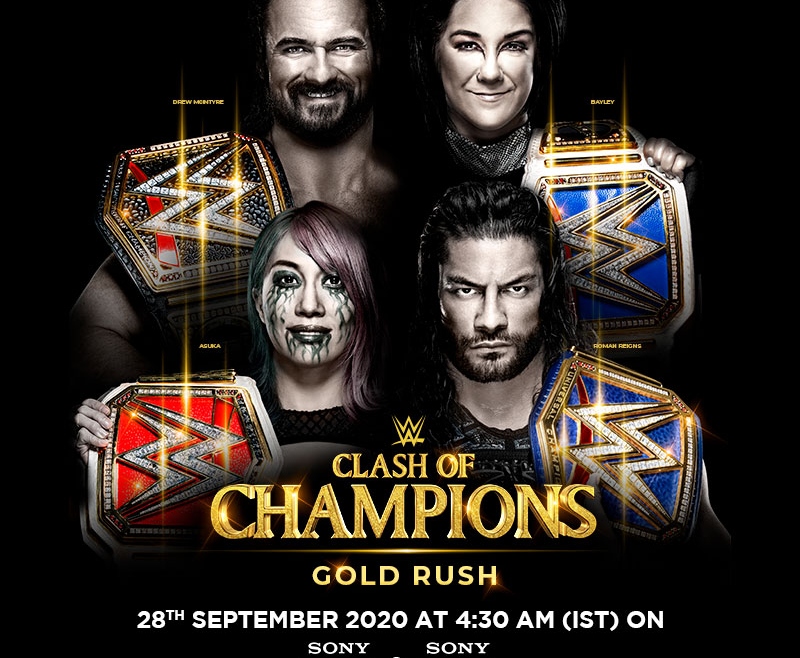 SmackDown Women’s Champion Bayley will defend her Championship against Nikki Cross for the third time within two months, and this time at Clash of Champions.

#WWEChampion @DMcIntyreWWE is set to battle @RandyOrton in an Ambulance Match at #WWEClash of Champions! https://t.co/iLwf65VpSz

In the latest episode of WWE Raw “In your Face” edition WWE Universe illustrated that a major stipulation match has been announced for Clash of Champions.

As things stand, Randy Orton is not medically cleared to compete due to Drew McIntyre’s attack. The Clash of Champions match will have the ‘Ambulance’ stipulation, and we should get more clarity on the match’s status next week on the go-home episode of RAW.

WWE have confirmed that Nia Jax and Shayna Baszler will defend the WWE Women’s Tag Team Championships against Ruby Riott and Liv Morgan at Clash of Champions.

Bayley has already defeated Nikki Cross twice earlier before that, but this time Cross would like to take this opportunity as a positive one since this time Bayley won’t get the help of Sasha Banks, who has already betrayed by Bayley last week on SmackDown Live.

This would be a hell of a match when these three clash of against each other in this win to claim the truth Intercontinental Championship. It will be interesting to see whether Jeff Hardy will successfully defend his title against Styles and Zayn or we will have a new champ on next Sunday.

WWE has added yet another exciting championship match for next Sunday’s PPV Clash of Champions 2020. The current SmackDown Tag Team Champions Cesaro & Shinsuke Nakamura will defend their titles against Lucha House Party at this event.

The teams of Seth Rollins & Murphy, Dominik Mysterio & Humberto Carrillo, and Angel Garza & Andrade took on each other for this # 1 contender opportunity in the latest episode of WWE Raw.

It was a pure annihilation in the ring when these six man battled out for the number 1 spot. However, there were so many shocking moments took place in this match as Seth Rollins left his tag partner Murphy alone in the ring during this match.