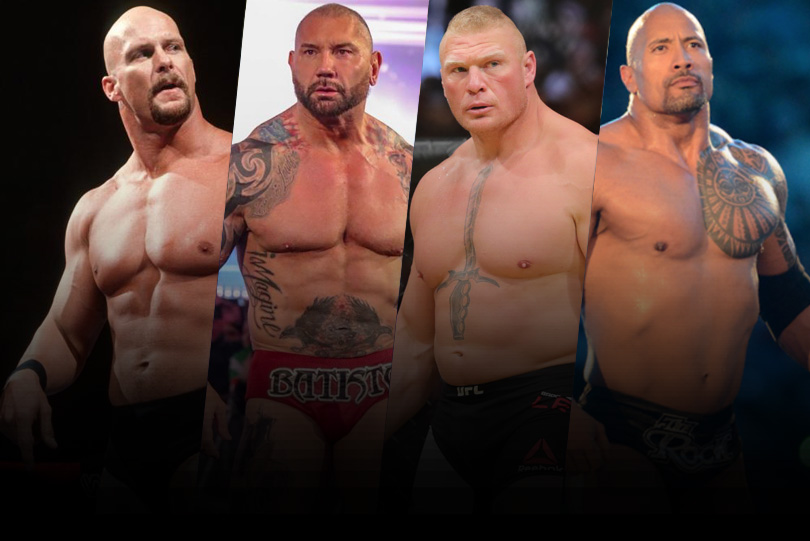 Whatever you think of wrestling as a sport, you cannot deny that it is not entertaining. It the sheer fan following for the sport especially pro wrestling and its leader WWE which bears testament to the claim. And it this reason that wrestlers like Stone Cold Steve Austin and John Cena rake moolahs in the ring.

But the question is who is the highest-earning wrestling in the world? English daily The Sun has compiled a report of top 10 richest WWE wrestlers. Here is full list.

10- Mick Foley: £11.6m
A WWE Hall of Famer, Foley was a four-time world champion and eleven-time world tag team champion. He has wrestled under many ring names such as Dude Love, Mankind, and Cactus Jack. Now, he makes appearances occasionally, sometimes as a guest referee or a special general manger.

9- Chris Jericho: £13.9m
Canada’s most famous wrestling export, Jericho currently wrestles in both New Japan Pro-Wrestling and AEW. Now 49, Lionheart, as he’s affectionately called by his loyal following, had his greatest moment in 2001 when he became the first Undisputed WWF Champion. He beat The Rock and Stone Cold Steve Austin on Vengeance that night.

8- Big Show: £15.5m
He is the “World’s Largest Athlete” has bagged his wrestling income with TV and film work. He is the only man to have held the WWE, World Heavyweight, WCW, and ECW world championships.

7- Brock Lesnar: £19m
Whether it’s UFC or WWE, The Beast Incarnate has done well financially out of both the sports genre. He became the youngest the then-WWE champion at 25 in 2002. He returned to UFC in 2016 and defeated Mark Hunt, before being tested positive for a banned substance and was fined for a year.
mm

6- Kurt Angle: £19m
The 1996 Atlanta gold medallist and WWF/WWE championship four times. John Cena on Angle once said, “he is, without question, the most gifted all-around performer we have ever had step into a ring”.

5- Hulk Hogan: £20m
What’s Up Brotha! was his trademark statement to greet his fans. He is regarded as the man responsible for taking WWE to the great heights and setting stage for the ‘Attitude Era’.

4- Triple H: £31.3m
Paul Michael Levesque, better known as Triple H, is also the Executive Vice President of Global Talent, Strategy and Development as well as the founder and senior producer of NXT. He has a total of 25 championships, including nine reigns as WWF/WWE Champion and five as WWE’s World Heavyweight Champion.

3- Steve Austin: £35.2m
One of the most interesting facts about him is that before being called the 3:16 Steve Austin or the Texas Rattlesnake, Stone Cold went under the nickname The Ringmaster. Austin is a Triple Crown Champion, a six-time WWF Champion, a two-time Intercontinental Champion and a four-time WWF Tag Team Champion. He was the face of the entire ‘Attitude Era’.

2- John Cena: £43m
With Austin bidding WWE adieu, the baton was passed to Cena who became the new face for WWE in the 2010s. He is amongst the highest world championship winners. But off late he has been missing from action in the ring as he is concentrating on making a career in Hollywood.

1- Dwayne Johnson: £200m+
It does not come as a shock that the Brahma Bull is leading the charts. He has been named Forbes highest-paid actor for two consecutive years and that is enough to tell why he is the highest earner in WWE.