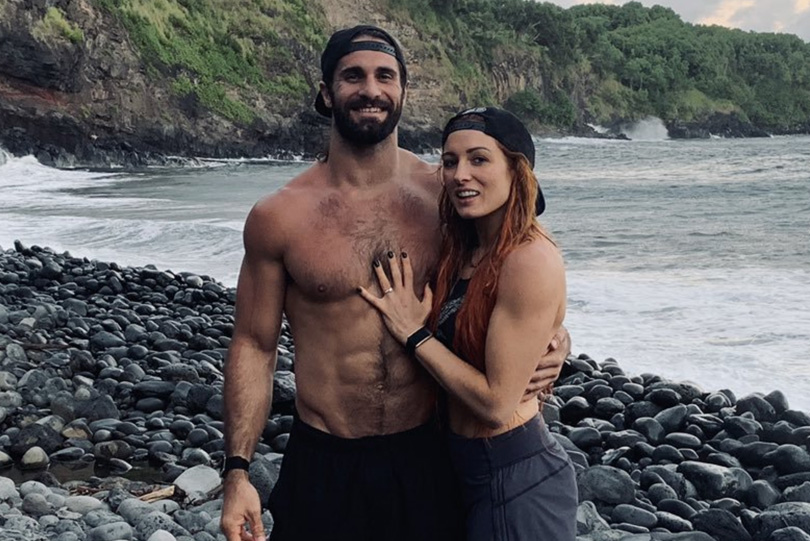 WWE News: It was a moment of happiness for Seth Rollins and Becky Lynch last month when the Monday Night Messiah shared the news of Lynch’s pregnancy. Following this, Becky Lynch relinquished her WWE Universal title.

It has been almost two months since ‘The Man’ last performed in WWE and now there are rumours that is looking for a career in Hollywood.

Her fiance Rollins in an interview spoke about her and how she is doing in recent times. He said, “She missed the go, go, go. She missed having goals in mind. and having something to work toward,”reported The New York Post published an interview with Seth Rollins.

Also Read: New WWE superstar documentary to be released this Sunday; Here is how to watch it

He added that “Lynch loves her job more than anything else and misses all the cheers. She sure does miss going back in the ring but she knows what is good for and at the moment she is happy”. The New York Post published an interview with Seth Rollins.

I took this a few moments after we got the best news of our lives and I don’t think I could have captured anything more beautiful. I can’t put into words how much it means to me. _____ Thank you all so much for your support over the last couple of days. The outpouring of love really has lifted us even higher than we’ve already been. _____ December can’t come soon enough!!

Rollins discussed how difficult it can be for a woman to go through this period and think of wrestling both at the same time.

“Most other women who are pregnant are able to still work their jobs while they’re pregnant and slowly transition out for a short period of time. The nature of our industry, she can’t do that,” reported The New York Post published an interview with Seth Rollins.

Working women often commit themselves to continue with the job in the first trimester of their pregnancy. However, WWE is more about physicality and athleticism and her departure had to be abrupt and immediate, and it would be very harsh for Becky Lynch to return at this moment.

Coming to a full halt because of the pregnancy and the pandemic was apparently extremely hard for the former Champion.

“For her to go just a million miles an hour to nothing and then to try to figure out, ‘What do I do now?’ in the middle of a pandemic as well, where there is just not a lot to do in general. Definitely a test for her” reported The New York Post published an interview with Seth Rollins

Rollins also given little probably of her return and door remains open for Lynch in WWE to show her potential come back but before December things seem little difficult.

“Oh yea, I expect so. Obviously that’s gonna be up to her and how she feels. I think she has aspirations to return, but I don’t know. Things can change between now and December,” reportedThe New York Post published an interview with Seth Rollins.