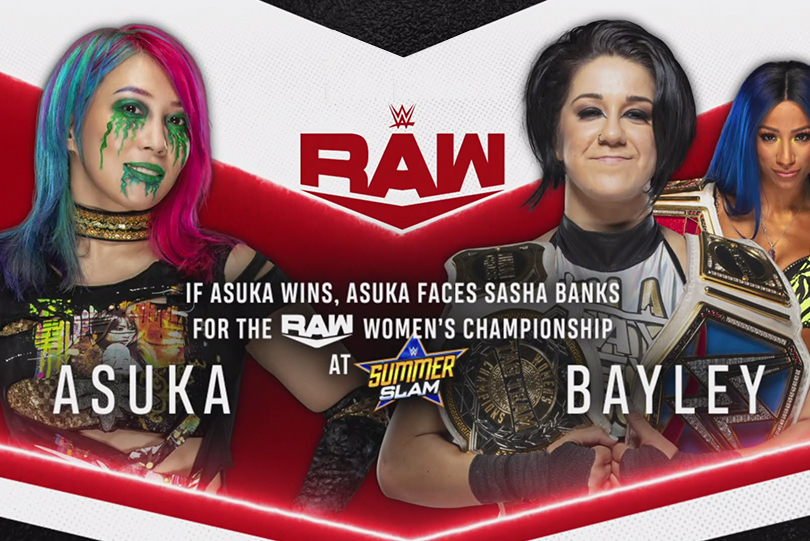 WWE RAW Preview: A major non – title match has been announced by WWE, after the latest episode of WWE Raw. WWE Smackdown Women’s Champion Bayley will take on Asuka in a non-title match in next week’s Monday Night RAW with some major implications for Summerslam.

The major implication in this match would be – – if Asuka wins, Asuka faces Sasha Banks for the RAW Women’s Championship at SummerSlam. It would be quite difficult for ‘the Golden Role Models’ to take out angry Asuka this time from the equation. Moreover, Asuka will be in the dangerous mood after she lost her title last week on RAW and her friend Kairi Sane both at the same time, she will be looking to break the shackles against Bayley next week on RAW to earn the golden opportunity for Summerslam.

Nevertheless, Sasha Banks would be facing the fear to face Asuka at SummerSlam if Asuka wins against Bayley next week. Meanwhile, there are chances that Shayna Baszler might interrupt in this match between Asuka and Bayley since Shayna Baszler also given a cheap shot to Sasha Banks on her face in the latest episode of WWE Raw. And she will look for the Sasha Banks’ championship at SummerSlam.

So it will interesting to see who will win next week on RAW or will find a triple threat championship match for the RAW Women’s Champion. Where Sasha Banks will defend her Championship up against Asuka and Shayna Baszler based on current scenario after the latest episode of WWE Raw.