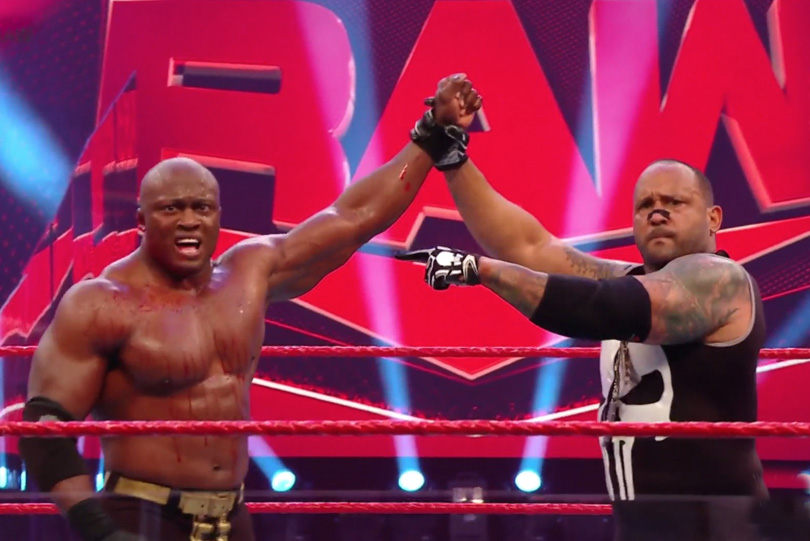 WWE Raw results: Today’s Monday night RAW kicked off with double contract signings for men’s and women’s championship. During the contract signings, a brawl broke out and was settled up with tag team match between the Champions (Drew McIntyre& Asuka) and the Challengers (Dolph Ziggler & Sasha Banks). In another segment, the Big Show called out Randy Orton but the latter did not appear. Instead, it was Hall of Famer Ric Flair who appeared and named Orton the G.O.A.T of WWE. The week was packed with action and insight into what we can expect from next week’s WWE Raw.

Here are the top 5 moments from WWE Monday Night RAW

Last week R-Truth lost the title against Akira Tozawa after Bobby Lashley brutally assaulted him. But this week, Truth regained his title.

Tozawa stood with a trio of ninjas as he prepared to take on R-Truth. The match did not last long before Truth managed to convince the champion to stop for a moment. It gave the challenger an opportunity to roll up the champion for a three count. Afterwards, Truth did what he does best. Ducked and ran off with the title.

Bobby Lashley has been impressive since his return in WWE and for the last couple of weeks, he has been playing the role of the heel. The wrestler has been interfering in matches on regular occasions and this week the latest victim to his wrath was United States Champion Apollo Crews. Later, Lashley locked Ricochet in a full nelson to win the match, setting the stage for a possible triple threat match for the US title at Extreme Rules: The Horror Show.

3) The Big Show’s disappointment and trouble for Orton

Forget the pants, @AngelGarzaWwe got his SHIRT ripped off by @WWETheBigShow along with a pair of gigantic devastating chops!

Once again the giant was standing tall alone in the ring after he defeated the team of Andrade and Angel Garza in a Two on One handicap match. With the win he sent a clear message for Ric Flair and Randy Orton that he is ready for the challenge at Extreme Rules 2020, given if Orton shows up. It seems like Orton has some other plan and he may attack the giant from behind in the following weeks and set up the tone for Extreme Rules.

Rollins and company called out Rey Mysterio but the latter did not show up and as a result of it Seth Rollins teamed up with Murphy against Aleister Black and Humberto Carrillo. The four superstars competed in probably the best match of the night. The winner was Rollins who stomped Carrillo for the victory. After the match, he put Rey Mysterio’s mask on Carrillo and stomped him on the steel steps.

1) The Showoff and The Boss

Dolph Ziggler teamed up with Sasha Banks to face the Champions Drew McIntyre and Asuka in a tag team match. The show and the boss pulled off the impressive victory against champions and sent the message for the champions that same may happen at Extreme Rules: The Horror Show.