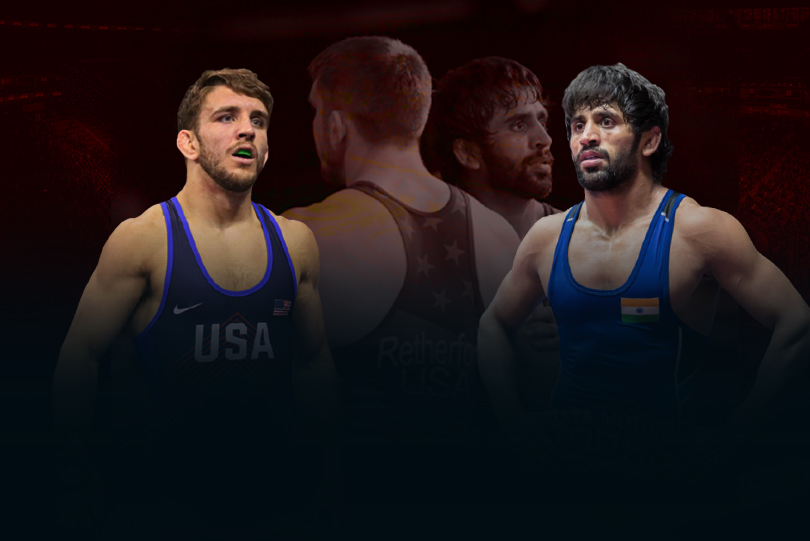 Bajrang Punia vs Zain Retherford LIVE: Bajrang Punia will eye to continue his winning run when he faces USA’s Zain Retherford in an exhibition match on Tuesday. The Indian wrestler is currently attending a month-long camp in the US and will be the main card of the event which is being organised by Nittany Lion Wrestling Club. It will be a rematch from the Rome Rankings held in 2020, where Bajrang outlasted Retherford 5-4.

Fresh off a solid winning performance at the FloWrestling 150-pound bracket this weekend, where Bajrang won $25,000, is ready for more action. Wrestling for India, Bajrang has competed at five Senior World Championships, earning silver in 2018 and bronze in 2019. He is also a 2017 U23 World silver medalist.’ He has also qualified India in the 65kg Tokyo Olympic weight class and therefore will be eyeing this match to test his mettle and improve on his shortcoming, especially his much-discussed leg defence.

Retherford, on the other hand, is a three-time NCAA champion for Penn State, He has represented the USA at the 2017 and 2019 Senior World Championships. Though he didn’t medal in either appearance, Retherford has proven himself to be one of the best 65 kg wrestlers in the country on more than one occasion. He has been an impressive freestyle wrestler since his youth days, winning a Cadet World gold medal in 2012.

The match will be telecast live on Rofkin at 6:00 am IST.

Joining the NLWC last January, Snyder is a 2016 Olympic champion, two-time World champion (2015, 2017) and owns two other World medals, including silver in 2018 and bronze in 2019. He also owns three NCAA titles, wrestling for Ohio States. Snyder’s last international competition was the Pan American Championships in March, where he won gold.

Tomorrow, he’ll face Ty Walz, who is a 2018 U23 World bronze medalist, training at the Soueast RTC in Blacksburg, Va. Additionally, he was an ACC champion and three-time All-American. Walz most recently competed at the RTC Cup, where he collected two wins to help his squad to the finals.