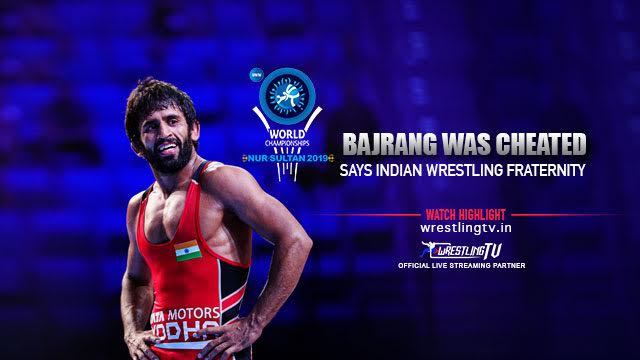 September 20, 2019 0Comments 694Views 8Likes
The Indian wrestling fraternity and fans cannot fathom the loss of Bajrang Punia in the 65 kg weight category semi-finals. According to the fans and wrestling experts, Punia’s disappointing loss in the last 4 bout to local Kazakhstan wrestler was due to controversial and questionable judgements by the referee and judges.

A hapless Bajrang, who lost on the basis of tie-breaker rules after getting locked at 9-9 with his Kazakh opponent Daulet Niyazbekov, was seen pleading with the mat chairman to take appropriate action against the home wrestler for several fouls – including hitting on face, pulling costume and delaying tactics.

“The referee did his job honestly, but the mat chairman and the judge blundered. On one occasion, when the referee awarded a caution point, the judge looked busy arguing with Bajrang’s coach than noticing the action in the middle,” said wrestlingtv expert & Arjuna Awardee Kripa Shankar

“There is no place for boxing and kabaddi in wrestling. The United World Wrestling (UWW) should take note of this and initiate appropriate action.”

“I am very disappointed. Whatever I saw today was unfortunate. Bajrang was much better than Kazakh wrestler and he was robbed of the victory in the semi-finals”

Raj Singh, former secretary of the Wrestling Federation of India (WFI), said some decisions in the bout were not fair. “Had the bout been held elsewhere, the result would have been different,” said Raj Singh.