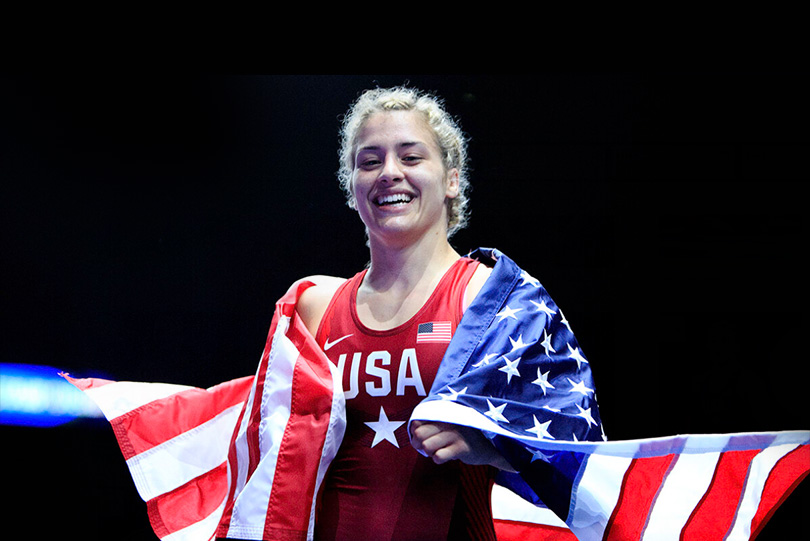 The USA athletes claimed seven of the 12 finals spots, setting up two All-American finals matches at 62 kg and 68 kg.

Maroulis looked solid at 57 kg, outscoring her opponents 40-1 in her four matches. Also a two-time World champion, Maroulis dominated her way to the finals by way of back-to-back-to-back technical falls. In the finals, she faced Laura Mertens, who has represented Germany at three World Championships. While Mertens was able to slow down Maroulis’ scoring, the American still controlled the match for a 4-1 victory.

In one of the most anticipated U.S. women’s freestyle matchups, 2019 World champion Tamyra Mensah-Stock met up with two-time World Team member at 65 kg Forrest Molinari in the 68 kg gold-medal match. Mensah-Stock used two takedowns in the final frame to spur her to a 6-1 win over her U.S. teammate.

On her way to the finals, Mensah-Stock collected two pins and a technical fall. She wraps up a fantastic week as she headed to France fresh off a win over five-time World champion Adeline Gray in a superstar matchup put together by FloWrestling.

For Molinari, she logged two strong comeback wins in the quarterfinals and semifinals to rightfully earn her spot in the finals.

Hildebrandt tech’d her way to a gold medal at 50 kg, winning her first three bouts with 10-0 scores. In the finals, she faced 2017 U23 World champion Evin Demirhan from Turkey, getting off to a fast start with a 6-0 lead at the break. In the second period, Hildebrandt scored on two takedowns to ultimately earn her a 13-2 win.

In the other USA vs. USA final, Miracle took on five-time age-group World medalist Macey Kilty in the 62 kg finals. Kilty drew first blood with an early takedown, but it was Miracle who controlled the rest of the bout, nearly pinning Kilty at the end of the first period. Eventually, Miracle claimed the title with an 8-2 win.

At 53 kg Winchester landed a spot in the finals, where she met up with 2009 World champion and four-time World runner-up Sofia Mattsson of Sweden. It appeared that Mattsson would shut out the reigning World champ; however with less than a minute left, trailing 5-0, Winchester scored a takedown and a tilt to go down by only one point. In the final 10 seconds, Winchester attempted a shot but Mattsson came out on top for a 7-4 win.

National Team member Fearnside bounced back from a first-round loss, winning three matches in the wrestlebacks to earn a bronze medal. In her medal match, Fearnside dominated Lisa Ersel of Germany with an 11-0 win.

Competition continues with men’s freestyle action on Saturday at 10 a.m. local time (4 a.m. ET) live on Flowrestling. Fans can keep up with the action by following @USAWrestling on Twitter.

(The story was originally posted by USA Wrestling)