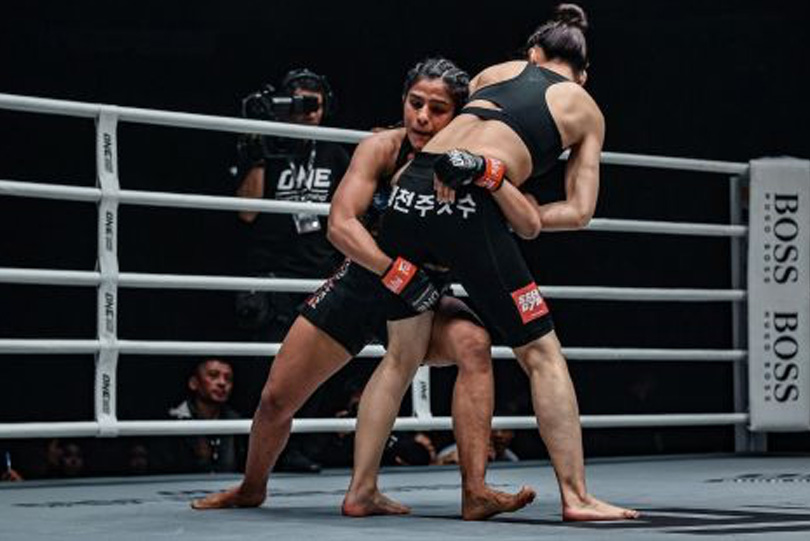 India’s Ritu Phogat is all set to return to the octagon for the upcoming ONE: INSIDE THE MATRIX match against Cambodia’s MMA sensation Nou Srey Pov on October 30. Known as the Indian Tigress, the MMA fighter said that she is ready for her battle and asked her fan to tune in to see her new tricks. “She is an experienced MMA champion and it will be a tough and interesting fight between the both of us. I am ready and have worked extremely hard for this. I am ready to give it my best! And as far as strategies are concerned, I would want each one of you to tune in and watch some of the strategies I deploy against the opponent,” she said, reported Indian Express.

Phogat is called as “the female Khabib Nurmagomedov” by Indian fans for her wrestling prowess and her 2-0 undefeated streak. She says, the UFC lightweight champion is a big motivation for her. “Yes, I have been very motivated by him and I watch a lot of his videos. I like his fighting style a lot and I am inspired by him. I aspire to be like him someday,” she said adding Indian cricket skipper Virat Kohli too is a big inspiration for her.

The 26-year-old has been in Singapore since March. She has been training that the ONE Championship training centre. Phogat says she has been trying to come out of her wrestling mould and add new techniques to her arsenal. She has been improving her jujitsu and striking prowess which are very important to be a good MMA fighter. “Yes absolutely, I have been working on perfecting a lot of other techniques but wrestling has formed the bedrock of a lot of my efforts in MMA. Moves like take-down are very easy for me. Initially, I had a lot of trouble with striking and jujitsu, but now I have improved all of this and you will see this in my match on the 30thof Oct,” Indian Express quoted her.

She is the first MMA fighter from the famous Phogat family and therefore carries a lot of expectations from the fans. However, she is determined to make a name for herself and says the beliefs of fans only motivate her to train harder. “No, not really. In fact, I get motivated due to high expectations and train harder. If people are rooting for me, I must not let them down!” “I urge parents to support their daughters because they deserve the chance to represent their country and make everyone proud. With hard work and dedication, anyone can achieve greatness,” Indian Express quoted the MMA athlete.