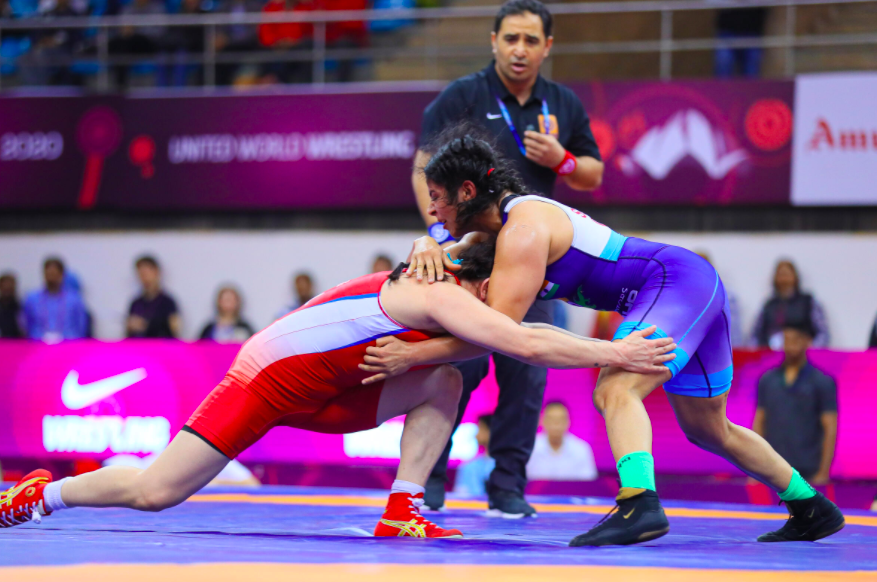 Rome Rankings Series Day 2 results: India’s Sarita Mor intensified the race for the place in the Indian Olympic team after bagging silver in the 57kg weight category at the Matteo Pellicone Rome Rankings. The 25-year-old, who won gold in 59kg in Asian Championship in Delhi last year, won both her bouts in a dominant fashion. She first thumped Kazakhstan’s Altynay Satylgan 4-1 in the quarterfinals and then followed it up by pinning another Kazhak, Emma TIssinma. However, she failed to replicate the same in the final losing to Brazil’s Giullia Rodrigues Penalber De Oliveira 4-2.

Sarita had started the match strongly, taking a two-point lead early in the game. But then she went back on backfoot and switched to a more defensive approach to save points. The decision proved costly, as Oliveira grabbed the opportunity to make a comeback. The Brazilian scored two late takedowns against the Asian champion to win 4-2 and claim the gold medal.

Nonetheless, Sarita’s second-place finish means Anshu, who withdrew from the semifinals after an injury, will have a new competitor in India’s 57kg women’s weight division. Besides, Sarita, 2018 world bronze medallist Pooja Dhanda will also vie her chances for the sport in the Indian Olympic team for the qualifiers in April.

The USA’s Tamyra Mariama Mensah-Stock continued her good form in 2021 as she cruised to her second title in two months. She began her Olympic year by bagging gold in January’s Grand Prix de France Henri Deglane. But it was in Matteo Pellicone she showed why she is one of the best in the world.

Another wrestler who came into the event with high hopes was Rio Olympic champion Canada’s Erica Wiebe. The defending champion at 76kg category did have some hiccups but prevailed in all her bouts to win her second consecutive gold medal in Rome.