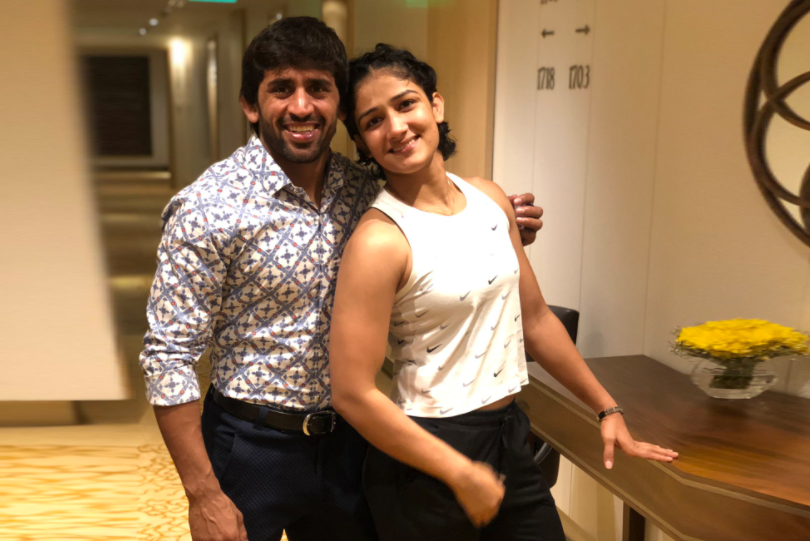 Sangeeta Phogat and Bajrang Punia have repeatedly expressed their love for each other on social media. One of the recent post by Phogat on Twitter had dropped had left everyone guessing, if the couple is getting married this year or not. Sharing a picture with Bajrang the former national medallist in 59kg wrote, “Mera safar sundar hai lekin mera humsaar usse bhi sundar hai (sic)”. Ending all the speculations, the wrestler has revealed that they are set to tie the knot this November-December. “Mostly everyone in my family got married in winter. We are just waiting for the date to get fixed,” she said. The dates will be out in 10-15 days she added

But how exactly this Love story started? Sangeeta says her love story with Bajrang started only after moving to Sonepat. The 22-year-old grappler initially started her wrestling career just like her other sisters- training under her father Mahavir Phogat. But later she moved to Sonepat along with her sister Geeta and Babita to train. It is there the Bajrang and Sangeeta story started.

You may hold my hand for a while, but you hold my heart forever @bajrangpunia60 ❤️

The two got engaged last year in a ‘roka’ ceremony in Punia’s home in Sonepat and had earlier planned to get married after the Tokyo Olympics. But, with the games delayed due to the pandemic, they now plan to become life partners before it. Phogat is ready to wear masks on her wedding and abide by the government guidelines. “We have to follow the protocols. Otherwise, if both of us get sick, then we will have to call off the wedding,” she chuckles.

The wrestler plans to wear something similar to her elder sister Babita’s lehenga which was designed by the famed designer Sabyasachi Mukherjee. “It was very nice. I have zero fashion sense, so therefore I am taking help from Geeta,” she added.

Meanwhile, Tokyo Olympics-bound Bajrang Punia has his focus on training for the games. He is currently training at the wrestling camp at SAI centre, Sonepat and has left the marriage decisions to be taken by the elders of the family. “Right now, I am focussed on training. As for the dates of the marriage, the family elders will take the final call on it”.