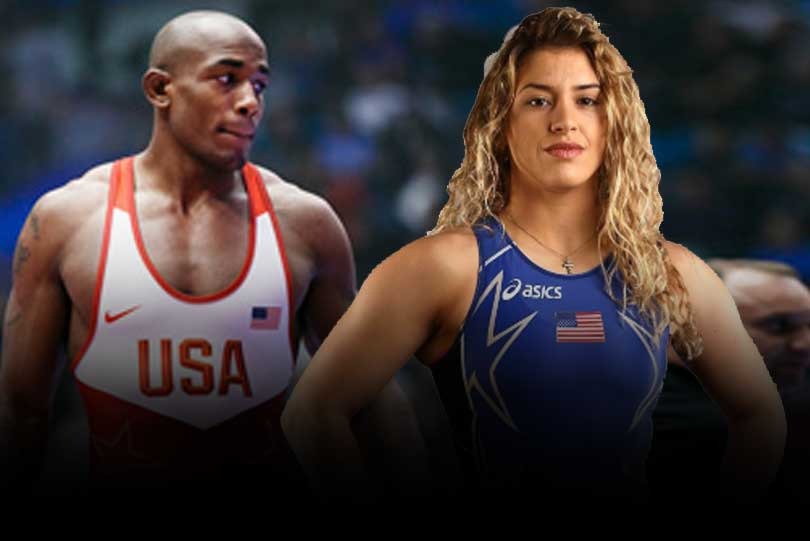 Instead of heading to Penn State for the U.S. Olympic Team Trials for Wrestling this weekend, 2016 Olympic gold medalist Helen Maroulis will likely spend time in the backyard of her Maryland home with her dog.

J’den Cox, a 2016 Olympic bronze medalist and two-time world champion, may head across the street from his Colorado Springs, Colorado, apartment and to a park for a workout.

The coronavirus pandemic has created changes on all levels, and for U.S. wrestlers that includes staying at home this week when the Olympic trials were scheduled to take place Saturday and Sunday at Penn State’s Bryce Jordan Center in State College, Pennsylvania.

“I’m at home,” said Maroulis, whose gold medal at 53 kg. four years ago in Rio was the first for a U.S. women’s wrestler. “I’m very lucky that I have my dog with me. There’s a backyard, so if it’s sunny out I’m going to get outside and probably get some sun.”

The pandemic has resulted in the Olympic Games Tokyo 2020 being pushed back almost exactly one year to a July 2021 start. And with that, the U.S. Olympic Team Trials for Wrestling will be rescheduled for new dates in 2021.

The change creates new challenges for athletes who must now adjust their training schedules and a host of other plans for the coming year. Already, freestyle wrestler Frank Molinaro, a 2016 Olympian, has decided to retire rather than press on for one more year.

For Cox and Maroulis, their focus has turned to adapting to the new realities of their situations as they continue to pursue spots in Tokyo.

“Honestly, I’ve moved beyond it. You kind of have to,” said Cox, who is moving from the non-Olympic 92 kg. class, in which he’s the two-time defending world champion, to 97 kg. for his second Olympic chase. “I can’t set my sights on something I’m not going to. I’ve got to continue to progress in whatever way that I can for what is to come next year and be prepared for what comes and when it comes.”

At a time when physical distancing is recommended and connections with other athletes and coaches are often done via social media, Cox was able to get a running workout done in Colorado Springs this week with two other U.S. wrestlers at a park near his home.

“We can run outside together as long as we keep our distance,” he said. “It was just nice yesterday to interact. It felt like forever since we had seen each other.”

“I used to live in New York City and then I actually moved home to Maryland,” Maroulis said, “so it’s nice to kind of be away from cities right now. I’m sure it’s affecting all of us right now because the (Olympic) date got pushed back. We’re just going to change the way we prepare and stuff like that from now on.”

But in the middle of their self-training with limited equipment, the weight of a larger global crisis is not lost on these Olympians.

“For me, the big perspective is like in a way that my brain works, what’s the goal right now?” Maroulis said. “What’s the biggest thing? And the biggest thing is not me and what do I need for my wrestling. The biggest thing right now is, OK, the whole world is in a pandemic so it makes sense that they need to postpone the Games and so I’m not going to have negative feelings about that because I think it’s the right thing to do.”

Said Cox: “You have to put things in perspective and prioritize what’s more important. That’s not the easiest thing always to do, especially when you have things like wants and desires and aspirations and dreams and goals all on the line. It comes down to what is needed to be done, or in some cases what is not needed to be done. It’s tough, but at the same time there are a lot worse things going on. There are a lot more people losing a lot more than what we are.”

Cox sees the pandemic as an issue that, in the end, could bring the world together.

He is hopeful that “the camaraderie that has come from all of this doesn’t disappear into the wind like it never happened. Around the world, we see how effective we can be when we work together as a planet, as a world, as people, and we continue that into our everyday lives, and work as one.

“If it were perfect, that would be what I would want,” Cox continued. “I don’t want this to be forgotten. We need to realize here, we have a common enemy, the whole world comes together. Can we do that just for people in general? I think that we can. I think that we should. We should desire that.”

The anxieties of a pandemic could lead to one of the most emotional Olympic Games in history next year in Tokyo, the wrestlers agreed.

“I think that’s going to bring the best out of people and the best in the world when it comes to competition.”