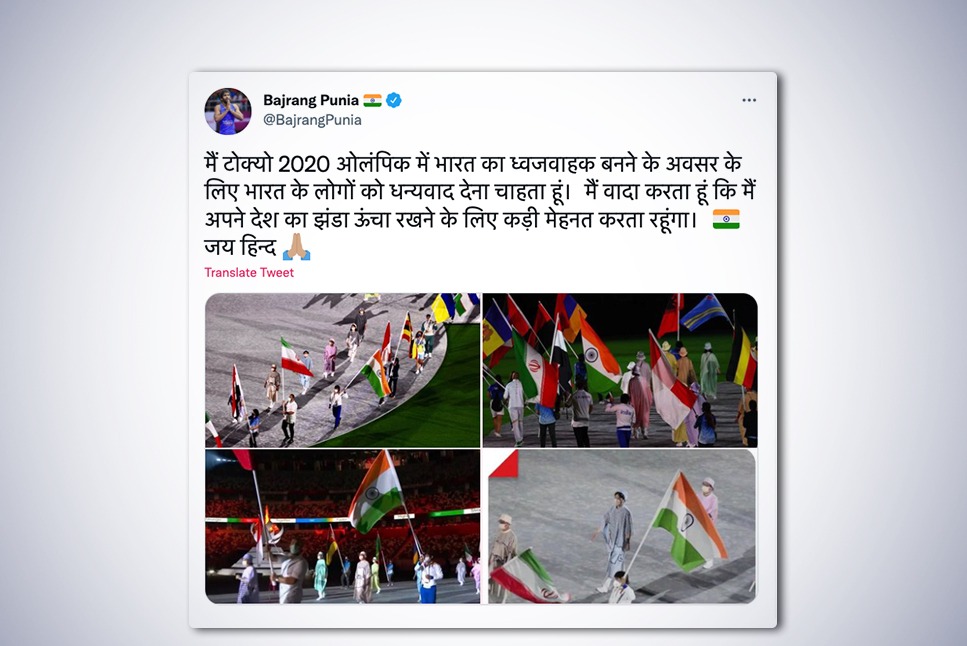 Tokyo Olympics: Indian wrestler Bajrang Punia might have won bronze in the Tokyo Olympics but the grappler wants to leave no stone unturned in practising and training for future events.

Tokyo Olympics: Bajrang, who was India’s flag bearer during the closing ceremony of the Tokyo Olympics, on Sunday promised to keep working hard “in order to keep the flag of India high”. “I would like to thank the people of India for the opportunity to be India’s flag-bearer at the Tokyo 2020 Olympics. I promise that I will keep working hard to keep the flag of my country high. Jai Hind,” Bajrang tweeted in Hindi.

Bajrang defeated Kazakhstan’s Daulet Niyazbekov on Saturday by 8-0 in the bronze medal match.

During the closing ceremony, the Indian wrestler entered the stadium holding aloft India’s flag and joined flag-bearers of other national Olympic contingents to mark the end of 17-days of the Games, which saw athletes from over 200 countries participated.

Bajrang along with flag bearers of other countries walked into the centre of the stadium and formed a ring around a dias as the whole area lit up to celebrate the hard work of everyone associated with the Olympics.

This year the Games were held with COVID-19 induced restrictions and all sports were played behind closed doors.

About 11,000 athletes from over 200 countries competed in Tokyo Olympics. India recorded its best-ever haul at the Olympics with seven medals (one gold, two silver, and four bronze).

The Olympic Games came to end after a stunning closing ceremony at the Olympic Stadium on Sunday.