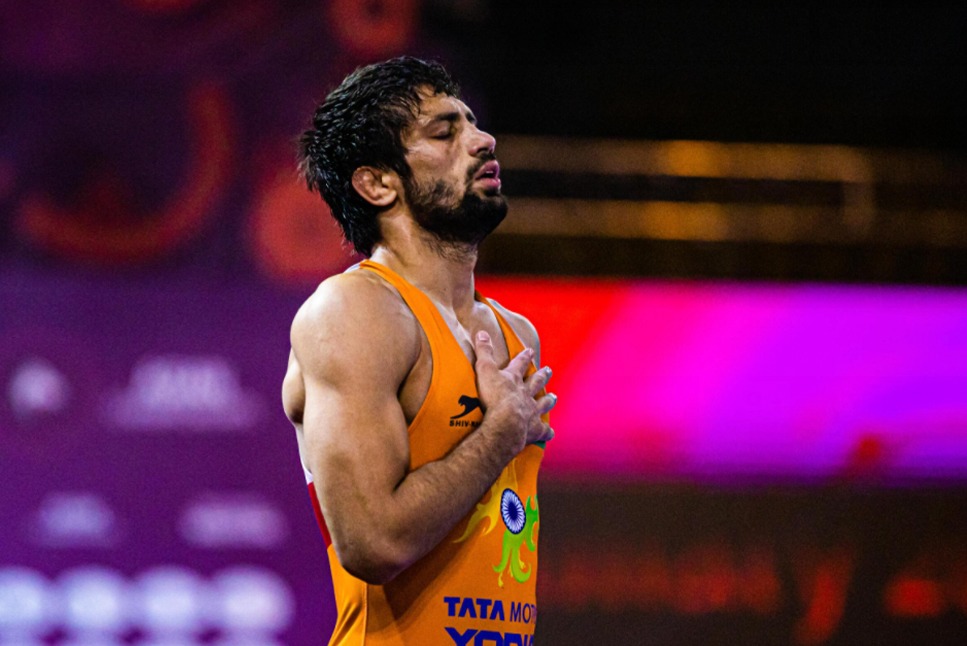 Tokyo Olympics Wrestling: Ravi Dahiya lose Gold Medal bout, but Indian champion wrestler wins Silver Medal for the country: Indian wrestler Ravi Dahiya on Thursday settled for silver after going down against Russian Olympic Committee’s (ROC) Zavur Uguev in the men’s 57 kg freestyle category at the Tokyo Olympics.Uguev dominated the match and didn’t give any chance to the Indian grappler to come out with flying colours as India lost the chance to win its first gold medal in wrestling. Despite starting off cautiously Uguev got off to the mark and doubled his lead within seconds.

Ravi might have equalled the scoreboard at 2-2 but Uguev showing off his immense power again took the lead as the Indian wrestler trailed 4-2 after the conclusion of the first period.Uguev came firing on all cylinders and further extended his lead as he gave no chance to Ravi to dominate the game.

At one point, Uguev was leading the match 7-2 when Ravi earned two more points to come close to his opponent.
Earlier in the day, wrestler Anshu Malik bowed out after losing to Russian Olympic Committee’s Valeria Koblova in the Women’s freestyle 57 kg repechage.Also, grappler Vinesh Phogat’s hopes of winning a bronze medal were dashed on Thursday as her quarter-final opponent Vanesa Kaladzinskaya of Belarus lost in the semi-final of the multi-sporting event.
As a result of this loss, Vinesh’s hopes of winning bronze through repechage was also dashed.

Ravi Dahiya Gold Medal Bout LIVE – Ravi Dahiya vs Zavur UGUEV LIVE: If Ravi can clinch the gold, it will make him the first Indian wrestler to win a gold medal at the Olympics and also just the second individual Olympic gold medallist for the country, after Abhinav Bindra.

Ravi Dahiya Gold Medal Bout LIVE – Tokyo Olympics Wrestling LIVE
Ravi Dahiya vs Zaur Uguev Head-to-Head: This is the not first time that the duo will square off against each other. They have previously met against each at the 2019 World Championships. Zaur had won the contest 6-4 and Dahiya will be looking to avenge his defeat against the Russian.Tokyo Olympics Wrestling LIVE: Ravi Dahiya ready for Gold bout vs World Champion Zavur Uguev, Golden bout starts @ 4.15PM, Follow LIVE updates

Won by 14-4 against Bulgaria’s Georgi Valentinov in quarterfinals

He defeated Sanayev 7-9 in the semifinals

Irrespective of the result, Ravi has assured India at least a silver from wrestling mats of Tokyo.

When to watch Ravi Dahiya vs Zavur Uguev LIVE?

Where will Ravi Dahiya vs Zavur Uguev play?

Makuhari Messe Hall A Mat B

The timing of the contest will be updated shortly on the website.

Where to watch Ravi Dahiya vs Zavur Uguev Final?

The world’s biggest sporting extravaganza will be LIVE Broadcasted & LIVE Streamed in more than 204 countries. In India, the Olympics & Paralympics will be broadcasted LIVE on Sony Sports Network & will be Live Streamed on SonyLIV/ Sony Sports. DD Sports will also broadcast the LIVE coverage.