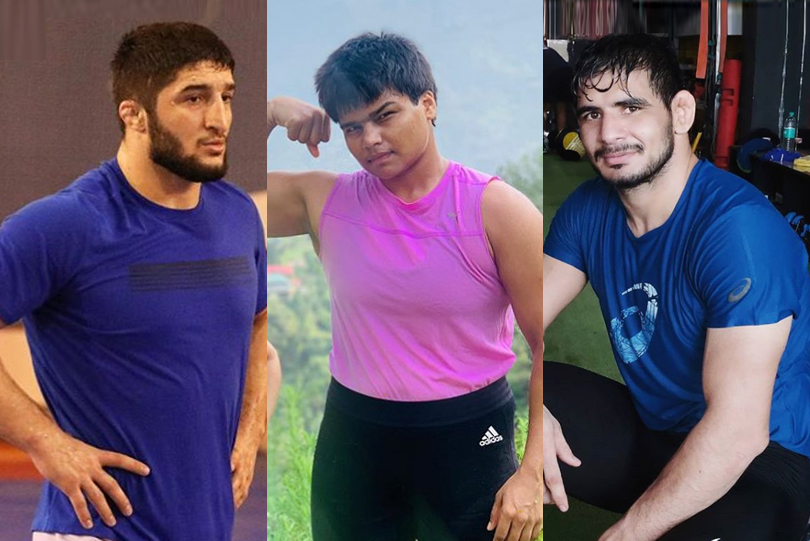 July 10, 2020 0Comments 355Views 0Likes
Wrestling has a massive following in India, especially in the northern part of the country. Unlike cricket, football and other major sports, wrestling does not need any fancy equipment to train. All a wrestler needs is a loin-cloth indigenously called as ‘langot’ and s/he is set for the training session. Amid the covid-19 outbreak, Indian and many foreign wrestlers returned to their roots to began the Tokyo Olympic training. The workout videos are a perfect embodiment of the adage ‘where there is a will there is a way’.
Here are top 10 champion wrestlers and their inspiring workout videos
1) Divya Kakran:
The Indian wrestler has shifted her training base to the Himalayas to train. She is currently training with her younger brother Deepak in Himachal Pradesh. The Asian champion would post videos of running uphill or sparring with his brother as part of her workout module.

2) Abdulrashid Sadulaev:
The world champion is the personification of a perfect wrestler. He is fast, agile, strong and a champion- everything a wrestler should be. But al these skills were not inherited instead they were made through hard training in the woods of Dagestan.

He is considered amongst the top 5 best Russian wrestlers in the current. He is a two-time Olympic champion and a look to become just the third Greco-Roman wrestler to win three gold medals if he can take care of business in Japan. The 29-year-old has built a reputation for being one of the strongest in the Russian weight room. He has used that strength on many occasions to launch opponents in his numerous world and continental performances.

The current top-ranked Indian wrestler in 74kg freestyle, Jitender needs all the exercise in the world to get past the challenges of twin Olympic medallist Sushil Kumar and 2010 CWG champion Narsingh Yadav. Luckily, he has world medallist Bajrang Punia on his side who is acting as his mentor.

5) David Taylor:
The US wrestler recently became father to a baby girl. Now, he is juggling between his training and fatherhood. And interestingly, Taylor has done a wonderful job in managing the two.

6) Frank Chamizo:
The Italian wrestler is stuck in the USA ever since the flying restrictions were imposed due to covid-19. Now, he is scheduled to fight twin world medallist Kyle Dake in an exhibition match in July and has been training for it. The Olympic medallist has booked the Tokyo berth in 74kg.

Don’t criticize my Boxing please. a lot of surprise soon 🔥🔥🔥 💪🏾

7) Deepak Punia
The world medallist has returned to Chhatrasal akhada and resumed training for the Olympics. He is training with Ravi Dahiya and Sushil Kumar.

8) Sushil Kumar:
The Tokyo Olympics will be the last hurrah for the 37-year-old and therefore, every day is important for him. Sushil is known for his work ethics and despite the lockdown, there was not a single day when the twin Olympics medallist did not train. In fact, he has no started training with his sons.

A post shared by Olympic Wrestling (@unitedworldwrestling) on Jul 8, 2020 at 7:59pm PDT