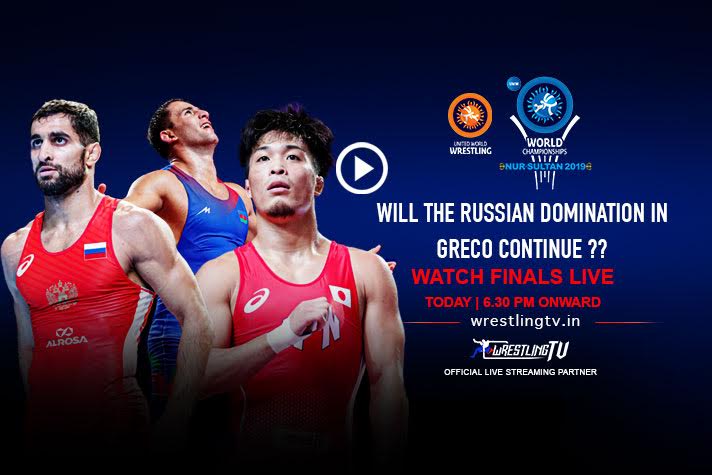 The UWW World Wrestling Championship is all set to see its first GOLD Medal night. The Day 2 evening session will have 4 finals of the Greco-Roman category. Wrestlingtv.in will bring the finals LIVE for the wrestling fans from 6.30 PM onwards. The Gold Medal bouts will be played over 55 / 63 / 72 & 82kg categories. Interestingly 2 Russian, 2 Georgians, 1 each wrestler from host Kazakhstan, Azerbaijan, Uzbekistan & Japan will fight for the Gold Medal. The question on everyone’s mind is will Russian supremacy in the Greco-Roman category will stay intact or will be see new super-power emerge in the world of Greco-Roman wrestling. To watch it LIVE tune 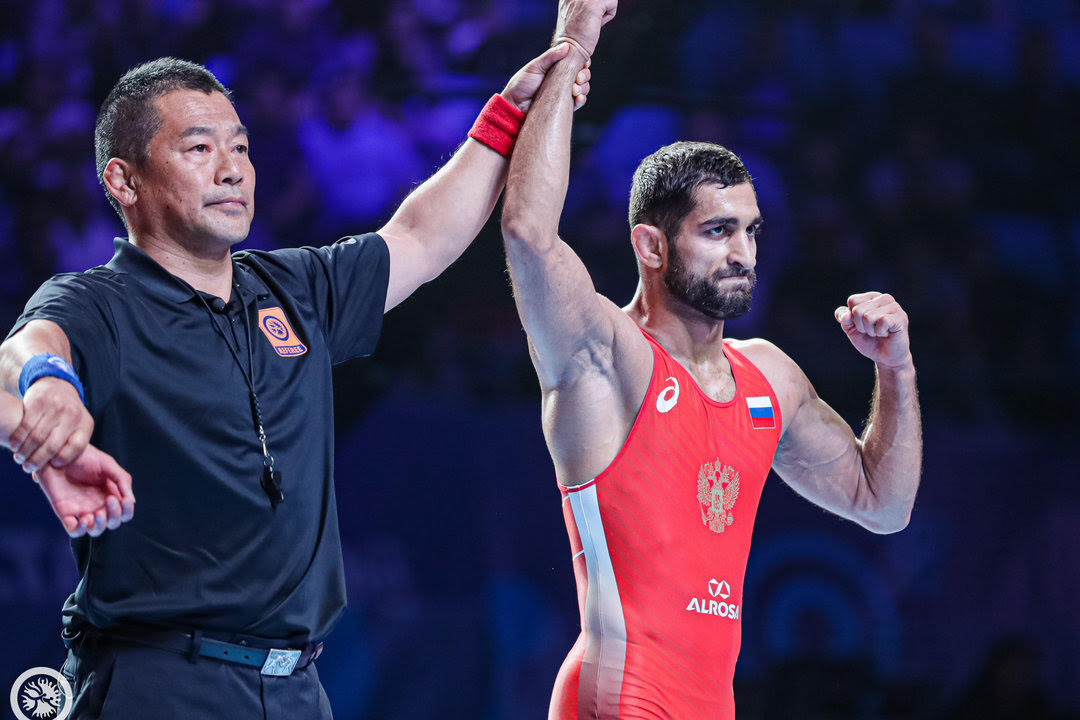 Russia, which captured six Greco golds at last year’s World Championships in Budapest, earned a shot at two right off the bat when defending champion Stepan MARYANYAN (RUS) made the final at 63kg and Abulazid MANTSIGOV (RUS) followed suit at 72kg.

Georgia is the only other country with two finalists, with Lasha GOBADZE (GEO) at 82kg joining Tsurtsumia. Kazakhstan, Japan, Uzbekistan and Azerbaijan have one finalist each.

Maryanyan survived a tough test in assuring himself of at least a silver medal, scoring all of his points in the second period to slip past Slavik GALSTYAN (ARM), 4-2.

The lanky Galstyan scored a takedown in the first period. But Maryanyan took advantage of the par terre position to go ahead 3-2 in the second period.

The remainder of the bout consisted mainly of locking arms, which frustrated Galstyan so much he made a challenge after time ran out, looking for a passivity penalty against Maryanyan. The challenge was denied, giving the Russian his final point.

In the gold-medal match, Maryanyan will face Rio 2016 Olympic silver medalist Shinobu OTA (JPN) in a rematch of the final at the Dan Kolov-Nikola Petrov tournament in February. In that match, Ota took a 3-0 lead in the par terre position, only to see Maryanyan score a reversal, then rip off five straight gut wrenches for a 12-3 technical fall.

Ota said he will be better prepared after denying Almat KEBISPAYEV (KAZ) a place in the final with his third technical fall of the day.

“If I can defend from the ground position like I did in the semifinal today, I don’t think it will be problem,” Ota said. “I want to go into the final tomorrow with the same feeling that led me to win all of my matches by technical fall.”

In the semifinal, Ota was put in the par terre position in the first period, but fought off Kebispayev’s attempts to turn him, leaving the score 1-0 going into the second period. Ota scored an early takedown, then used a duck under to a bear hug for 4 points. He finished off the match with a similar 4-point move for a 10-1 technical fall in 5:06. 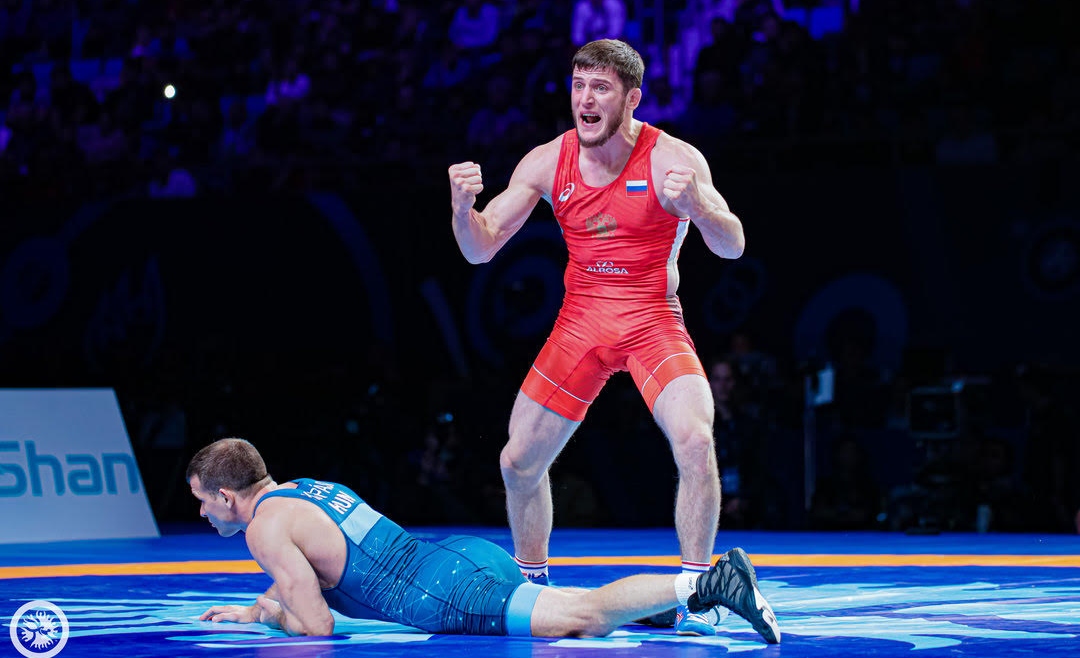 At 72kg, Mantsigov was similarly dominant in denying veteran Balint KORPASI (HUN) a second straight trip to the final, posting an 8-0 technical fall at 3:32. The big move was a 4-point counter of a back drop late in the first period.

Korpasi, the 2016 world champion and runner-up last year, had beaten Mantsigov in the only previous meeting between the two, in the semifinals at the 2017 European Championships.

Next up for Mantsigov—the only top seed among the four weight classes to make the final—will be Aram VARDANYAN (UZB), who scored a solid 4-1 win over 2019 world bronze medalist Aik MNATSAKANIAN (BUL). 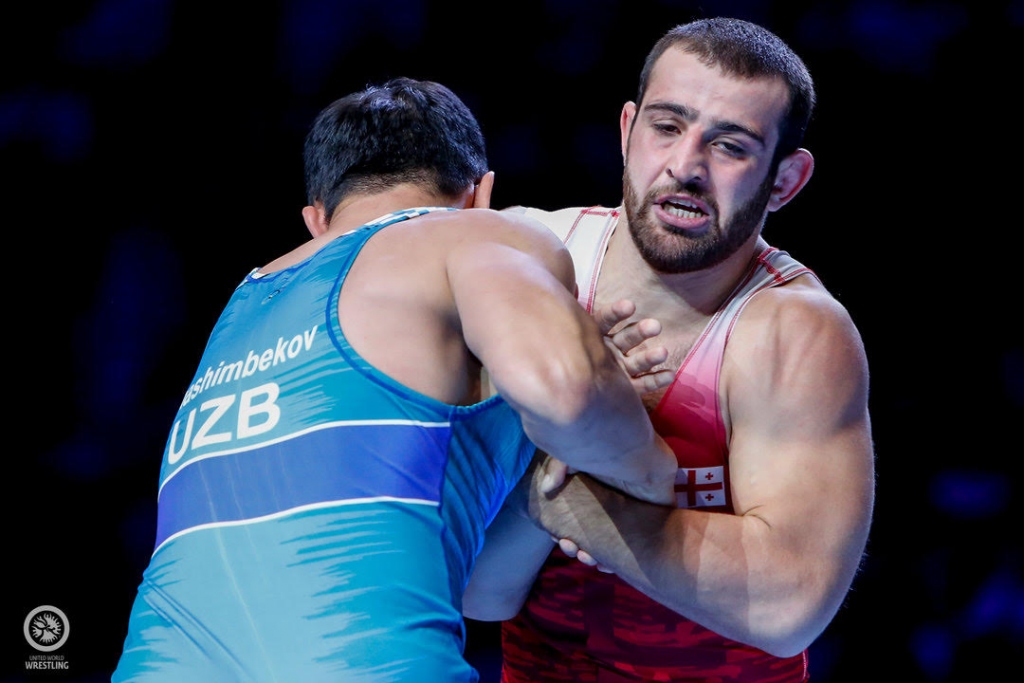 The 82kg final will be a showdown between European silver medalist Gobadze and 31-year-old Rafig HUSEYNOV (AZE), who assured himself of a first-ever medal in his eighth trip to the World Championships.

Gobadze scored a roll from the par terre position, then held on when he was put on the bottom to chalk up a 3-1 win over Nurbek KHASHIMBEKOV (UZB).

Huseynov came out on top of a very physical struggle with Rio 2016 bronze medalist and 2019 Asian champion Saied ABDVALI (IRI), driving his opponent backward for a 4-point move with :28 left to clinch a 8-5 victory.

The day session on Sunday will see the qualification rounds in the Greco-Roman weight classes of 67kg, 87kg and 97kg.