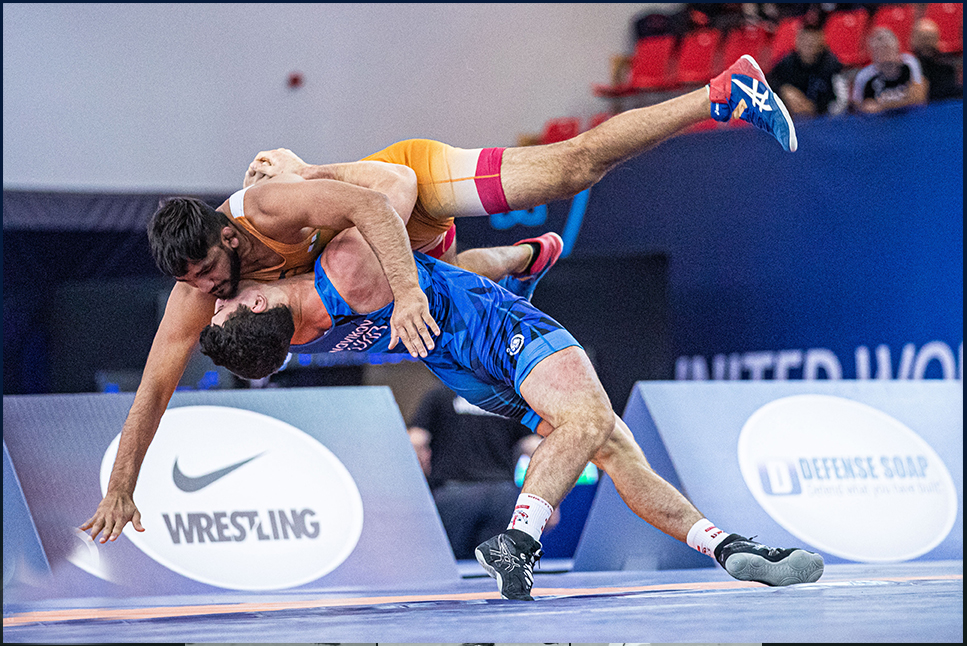 World Wrestling Championship Day 8 Preview: A day when two Olympic weight classes will be in action, a total of eight wrestlers who competed in Tokyo will take the mat in Oslo, Norway. Olympic champion Mohammadreza GERAEI (IRI) will be leading the field at 67kg with former world champion Hansu RYU (KOR). At 87kg, five Tokyo Olympians will be in action as bronze medalist Zurabi DATUNASHVILI (SRB) will be taking on Islam ABBASOV (AZE), Kiryl MASKEVICH (BLR), Lasha GOBADZE (GEO) and Nursultan TURSYNOV (KAZ).

The third will be 63kg, a non-Olympic weight, but a number of age-group world medalists are entered including U23 World champion Meysam DALKHANI (IRI). The host country Norway is going ahead with veteran Stig BERGE (NOR) who won a bronze medal at the Rio Olympics.

World Wrestling Championship Day 8 Preview:  But the fireworks are sure to go off at 87kg as big-throwing and dark horse Maskevich tries to put the disappointment of Tokyo behind him. He was in serious form going into the Olympics but suffered a tame loss to Mohamed METWALLY (EGY) in the opening round. Maskevich won the gold at the Individual World Cup in 2020 and a silver at the 2021 European Championships after suffering a loss to Datunashvili in the final.

If Datunashvili can build on his success from Tokyo, it will hardly be a surprise that he reaches the final in Oslo. After winning the European Championships, he qualified for the Tokyo Games from Last Chance Qualifier in Bulgaria before winning the bronze in Tokyo. He lost to eventual champion Zhan BELENIUK (UKR) but rallied back to beat Bachir SID AZARA (ALG) and Ivan HUKLEK (CRO) in the repechage and bronze medal bout respectively.

Abbasov and Gobadze will also be big threats to the gold medal as the former is a European Championships and Games silver medalist and Gobadze will like to win the gold in the Olympic weight class after winning the 82kg at the 2019 World Championships. Both were in Tokyo but lost in the opening rounds. Unlike Datunashvili, they did not get a chance in repechage and had to return empty-handed from Japan.

Belenuik decided to take a break after winning the gold in Tokyo but Ukraine can still hope for a golden run in Oslo as the talented Semen NAVIKOV (UKR) looks to finally step up and take over the weight class. He won the U23 World Championships twice and even captured the gold at the senior European Championships in 2020.