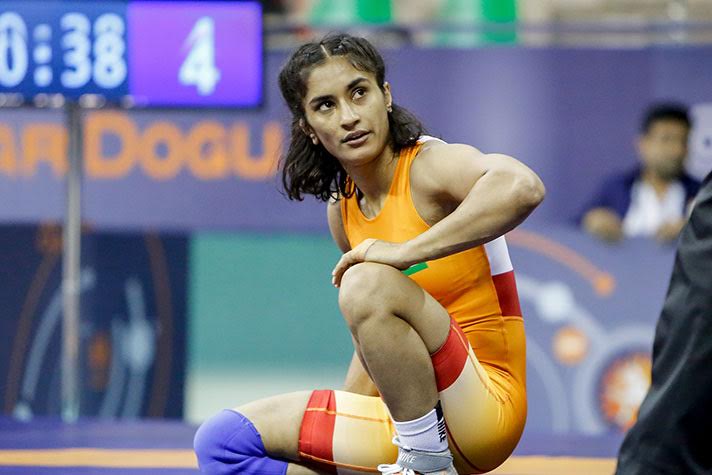 Vinesh Phogat along with three other Indian girls will open her campaign in the UWW World Wrestling Championships in Nur-Sultan, Kazakhstan, tomorrow (Tuesday). Coach Woller Akos has revealed what she needs to become the world champion.

Wrestler Vinesh Phogat needs to maintain Zen-like concentration from “zero to six minutes” to stamp her authority in the 53kg at the global level, says her personal coach Woller Akos.

The fiery wrestler from Harayna is preparing for her fourth World Championship after a reasonably good 2019 season following a switch to 53kg from 50kg. She had just made numbers in her three previous appearances at the Worlds (2013, 2015, 2017) but in Nur-Sultan she is a threat to every established wrestler in her new category.

A proven force, Vinesh has big medals in her kitty from Commonwealth Games to Asian Games. From Tuesday she would chase that elusive world title, which will also ensure her entry at the Tokyo Olympics.

Vinesh struck a chord with Akos when she went to Budapest for a short training stint before the 2018 Asian Games and since February this year the Hungarian has been her personal coach.

“She needs to keep concentration from zero to six minutes. This is very important. As of now it’s like a wave, up and down,” Akos told PTI in an exclusive interview.

So, how can she achieve that unwavering focus?

“There are two part to this. One is physical, which is easy. You do aerobics and train according to match-time (six minutes). If she can hold the tempo from zero to six minutes in training she can do that on mat also.

“The second part is mental. And that is the job of sports psychologist and she is taking help,” Akos explained.

The Hungarian said Vinesh has improved a lot since February but more work is needed. “There was not much motion circle, not much arm-work. She waited very much for the action. Now it’s better. The physical preparation, I would say, is perfect.”

Asked to elaborate the arm-work, he explained, “You control your opponent with this. You take back your arms, you take control by under-hook position from head-lock position.”

While Vinesh dominated the 50kg category in 2018, triumphing at CWG and Asian Games apart from winning a silver medal at the Asian Championship, Akos said it only made sense that she changed her weight-class.

“The rules changed after Rio Olympics Games. The weigh-in is in morning and you have two hours maximum to go for the matches. There’s not much time to cut weight. Then again next morning, you have weigh-in. This is very hard,” he said.

“Asian Games is one-day competition while World Championship, Olympics and Continental Championships are of two days. It’s dangerous for body because if you lose weight, you lose water from body and it creates chances for muscle injury. In 53kg the chances are less than 50kg,” he elaborated.

Vinesh herself had said recently that she now trains smart instead of just slogging it out for hours.

Akos shed more light on the training program he has devised for her ward.

“Periodisation is important. She trained before also but it was very mixed. Sometimes this and sometimes that. Now, there are specific goals to be achieved in specific time periods,” he said.

It raises hopes that Vinesh can win a medal at the Tokyo Olympics. But Akos said he will speak about it only next year.

“Tokyo is still far. We are not there yet, so let’s not think about that. Stay in present. If we have little luck, she can go far but Vinesh and I don’t need pressure,” he said.

“She has a job in hand and needs to think about one match only. This is what is needed. She should not think about (Olympic) Qualification,” he warned.

Akos said the same philosophy of ‘being in present’ is also required on the mat, saying Vinesh must not make draw calculations in her mind.

“She shouldn’t anticipate that If ‘I win this bout and the other girl wins that bout, I will fight with so and so’. Think about six minutes you have in one match. She had this habit of looking at draw, making combination and calculations,” he said.

Akos said it was on his insistence that Vinesh arrived in Kazakhstan few days after the other girls came for training camp on August 28.

“Over the year, she is either at camp or travelling to competitions. She needed a fresh head by being at home, spend time with husband, family. Switching off is important,” he said.

Akos said speed and leg attacks have always been Vinesh’s strength but her fans will see something more in Nur-Sultan.

“She can put more pressure and we will see it in this World Championship,” he said.

Fans in India can catch the match LIVE on www.wrestlingtv.in.