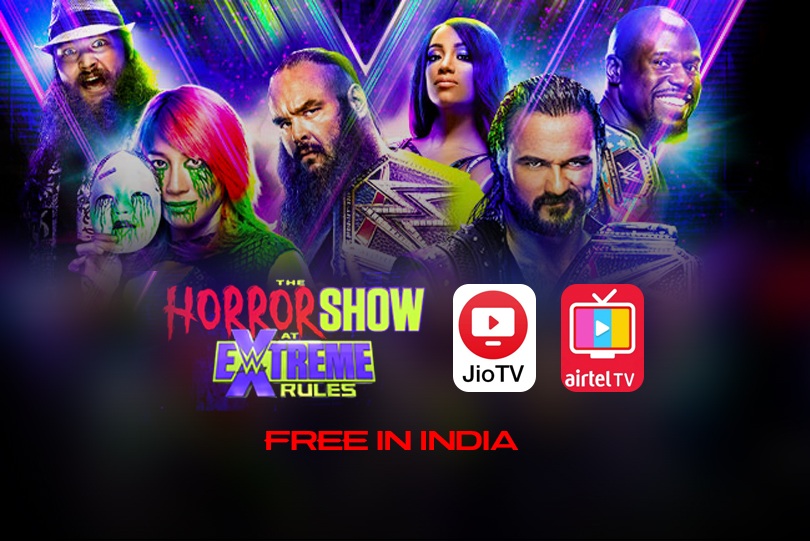 WWE Extreme Rules 2020 Preview: The Horror Show at Extreme Rules is just two days away and everyone is excited to see what the upcoming pay-per-view holds for them. Extreme Rules will stream live on Sunday, July 19 at 7 p.m. ET and 4 p.m. PT. In India, Extreme Rules 2020 will be telecast live on Sony Networks on July 20. Moreover, if you want to watch it for free you watch it on AirtelTV and JioTV. However, the caveat is that you can only watch WWE on AirtelTV or JioTV if you are a subscriber of either of the two telecom companies.

At the Horror Show at Extreme Rules, there will be the Wyatt Swamp Fight between Braun Strowman and Bray Wyatt, a WWE Championship clash between Drew McIntyre and Dolph Ziggler, Raw and SmackDown Women’s Championship Matches, a gruesome Eye for an Eye Match and much more highlight the pay-per-view event.

Also Read: WWE Extreme Rules 2020 match: Who can Street Profits defend their title against at The Horror Show on Monday

Wyatt ended his harrowing silence by resurrecting the dead from The Firefly Fun House and shocked the Universal Champion. After a week of soul searching, Strowman responded adamantly and promised to drag Wyatt into the Swamp to let the alligators finish the job. As Wyatt’s maniacal laugh echoed through the WWE Performance Center, Strowman knew the die had been cast for the Wyatt Swamp Fight.

The Monster Among Men bested his old family member with Black Sheep mind games at WWE Money in the Bank. Will Strowman once again dig into his inner darkness, or is Wyatt laying a devastating trap for his rival?

Dolph Ziggler arrived on Raw determined to remind Drew McIntyre who he owes for his rise to the pinnacle of sports-entertainment. The Showoff will have the opportunity to back up his words at The Horror Show at WWE Extreme Rules in a match against the Scottish Superstar for the WWE Title.

One by one, McIntyre has vanquished every competitor to challenge his reign, as the likes of Big Show, Bobby Lashley, Seth Rollins and Andrade have all fallen short in their attempts to take the title. Upon being traded to Raw along with his tag team partner Robert Roode, Ziggler set his sights on the biggest fish in the pond, saying that McIntyre owed him after Ziggler helped McIntyre upon his return to WWE. The WWE Champion was happy to oblige Ziggler but seemingly warned him to be careful what he wished for, as McIntyre doesn’t plan on losing his title any time soon.

Will The Showoff be the one to end McIntyre’s reign, or will the fighting champion fend off another challenge?

Sasha Banks will try to join her tag team partner Bayley in becoming a double champion at The Horror Show at WWE Extreme Rules when she challenges Raw Women’s Champion Asuka.

The Boss, already one-half of the WWE Women’s Tag Team Champions, listened to “The Role Model” describe how great it is to be a double champion and decided she wanted to experience it for herself. After defeating The IIconics to retain the tag titles, Banks called out Asuka, who was happy to accept the challenge before attempting to fight off the WWE Women’s Tag Team Champions.

However, while Asuka was focused on Bayley, The Boss saw the perfect opening to lock the Bank Statement on the champion, sending a huge message ahead of their title showdown.

Bayley’s impressive reign over the blue brand awaits a challenge from a hungry, rising Superstar, as Nikki Cross earned a SmackDown Women’s Championship opportunity at The Horror Show at WWE Extreme Rules.

Bayley’s recent string of dominance appeared to leave no clear challenger for the gold, but a Fatal 4-Way matchup on the blue brand paved the way for Cross to step into the spotlight. The energetic Superstar outlasted her teammate Alexa Bliss, Dana Brooke and Lacey Evans to secure the coveted showdown.

Will Extreme Rules become a true horror show for the SmackDown Women’s Champion, or will Bayley be too much for Cross to overcome?

The Horror Show at WWE Extreme Rules added a new level of terror as Rey Mysterio and Seth Rollins will meet in an Eye for an Eye Match. Mysterio teamed with Kevin Owens to defeat Rollins & Murphy for the right to choose the gory stipulation where a winner can only determine by extracting the opponent’s eye.

The Monday Night Messiah has tormented the legendary luchador for months and nearly ended Mysterio’s career with a gruesome attack on his eye. With his career in jeopardy, the iconic Superstar watched as his son Dominik got involved to defend his father’s honour, but Dominik found himself in Rollins’ sights as well. With Rollins attempting to replicate the same brutal ocular assault on Dominik, Mysterio promised to get “an eye for an eye” from the devious Superstar.

Can Mysterio achieve the ruthless justice he craves, or will Rollins finish the barbaric attack that set this match in motion?

The past, present and future of the United States Championship will take centre stage at The Horror Show at WWE Extreme Rules when Apollo Crews defends his title against MVP.

Since winning the championship, Apollo Crews has shined in the spotlight with unbelievable strength and skill. The impressive display caught the eye of former U.S. Champion MVP, as the outspoken manager offered his services to the new titleholder. When Crews declined, the champion found himself in the crosshairs of MVP and his imposing client Bobby Lashley.

The fervent self-promoter went on to unveil a new-look U.S. Title on the red brand alongside The All Mighty and promised to usher an even more ballin’ reign.