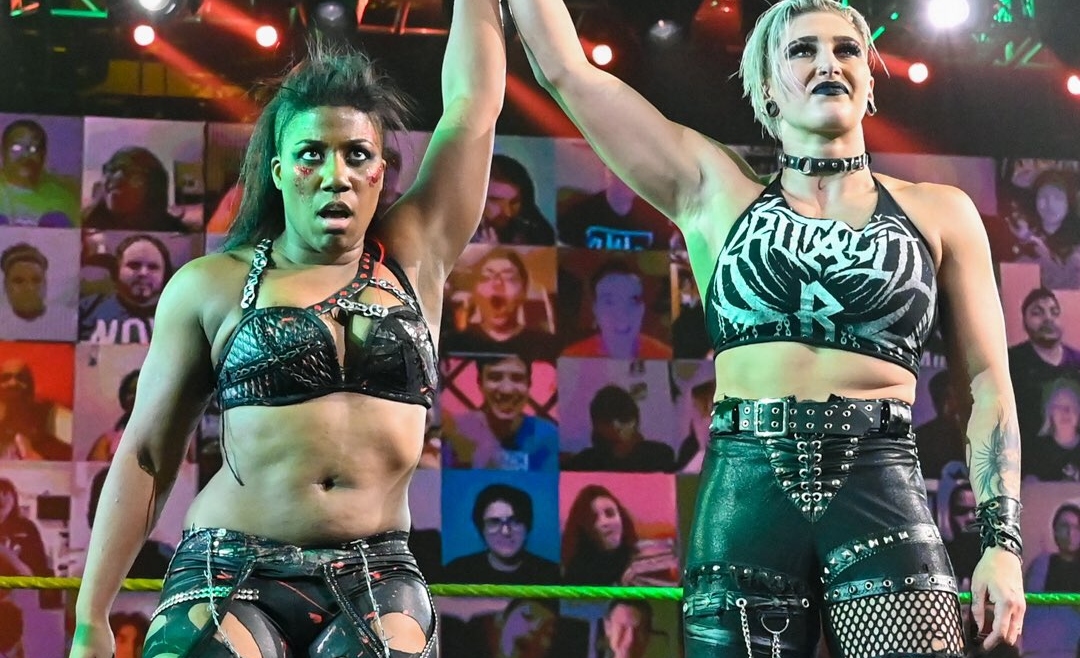 October 8, 2020 0Comments 1111Views 0Likes
WWE NXT results, Oct. 7, 2020
Tommaso Ciampa def. Kushida via disqualification
Much has been made of Kushida’s seemingly newfound, more vicious demeanour, but he faced a tough test against one of the most vicious Superstars in NXT history. The bout with Tommaso Ciampa was every bit as hard-hitting as one would imagine. Velveteen Dream cut their battle short, though, trying to take out Kushida, the man who defeated him Sunday at NXT TakeOver 31. However, he errantly struck Ciampa instead, ending the match by disqualification.

NXT’s resident Time Splitter wound up getting the better of Dream yet again, pummeling him on the outside of the ring until he retreated. Meanwhile, Ciampa appeared incensed with the result.

Killian Dain & Drake Maverick def. Ever-Rise
Killian Dain & Drake Maverick are anything but a well-oiled machine, though they still found a way to claim victory over Ever-Rise. Drake spent much of the bout being beaten down by the much more experienced duo of Chase Parker & Matt Martel until Dain powerbombed his own partner onto Parker, leaving Maverick in position for the pinfall.

Dain still wasn’t quite ready to celebrate with Maverick afterwards, instead of leveling him with yet another post-match haymaker. But The Beast of Belfast did show some sympathy this time, slinging Drake over his shoulder before heading to the backstage area.

Austin Theory is making a habit of biting off more than he can chew. “All Day” disposed of Leon Ruff in short order before issuing another open challenge, only to find the returning Dexter Lumis answering the call. Still, Theory found a way to seize control before getting himself in trouble with too much grandstanding, giving Lumis an opening to eventually plant him with a Uranage and put him out with Silence.

Afterward, Lumis was attacked by Cameron Grimes, who declared he was getting retribution for Lumis not answering him backstage last week.

Ridge Holland impressed against a fellow Brit in Danny Burch, emerging victorious after a quick but hard-hitting affair. Fisticuffs continued after the bell with Burch’s tag team partner Oney Lorcan joining the fray to provide backup for his fellow Brit-Am Brawler. However, the action was cut short when Holland’s knee appeared to buckle, and he was stretchered out of the building.

Shotzi Blackheart came away with another win, as the host of the upcoming NXT Halloween Havoc put Xia Li away after hitting a top-rope senton. Afterward, Boa arrived to offer Li an envelope, and Li appeared as confused as the NXT Universe likely was.

Ember Moon & Rhea Ripley def. Dakota Kai & Raquel González
Ember Moon may have not competed for more than a year, but you’d never know it from watching her performance tonight in her official return to the black-and-gold brand. She joined forces with Rhea Ripley to forge a dream team of sorts, albeit one with competing interests as they both eye Io Shirai’s NXT Women’s Championship. But on this night, they put their differences aside, operating seamlessly as a unit at several junctures.

Ripley and Raquel González battled on the outside before toppling over the broadcast table, occupying Dakota Kai’s attention momentarily. Moon took advantage, hitting a picture-perfect Eclipse for the win.