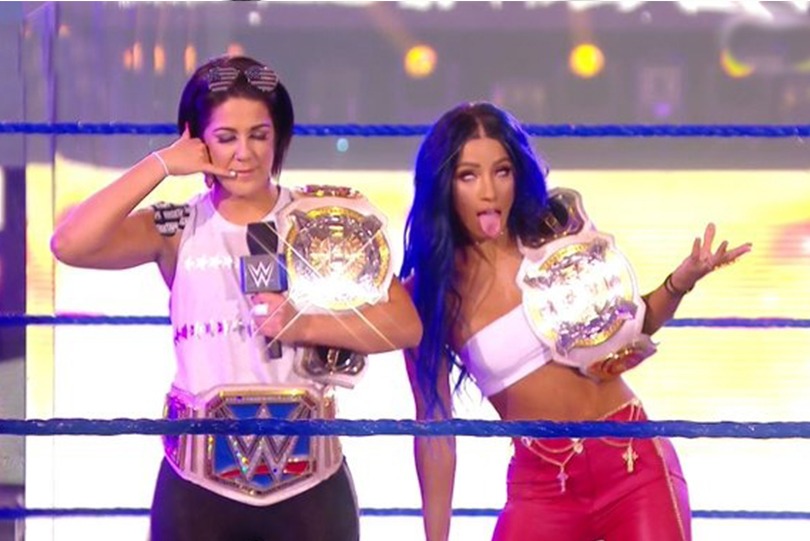 WWE Smackdown: The latest episode of SmackDown Live kicked off with Matt Riddle’s exclusive interview with Michael Cole which was shortly interrupted by King Corbin. Later on, Matt Riddle got one on one with John Morrison. Besides this, AJ Styles was also in action when he defended his Intercontinental Championship against Drew Gulak. The Sheamus vs Jeff Hardy rivalry also intensified setting the tone for the Extreme Rules 2020. And there were more many more exciting matches took place in this lastest blue brand episode.

So, WrestlingTV.in brings you top five moments from this latest episode of SmackDown

WWE SmackDown women’s champion and one of half of the tag team championship Bayley entered in the along with Sasha Banks but both were interrupted by Alexa Bliss and Nikki Cross. Alexa and Bayley were then were put in a one-on-one match up, while Cross and Banks joined them by the ring corner respectively. The match did not last very long since Cross and Banks got engaged into a brawl and as result of it the official rung the bell and Bayley won the match.

“The Samurai of NJPW” Nakamura was also eager to get into a big fight. Since he did not get a major move in the last couple of months, he was ready to grab the first opportunity that came knocking his way. He was put against The New Day’s Kofi Kingston in this latest episode. It was a stunning match and Nakamura got the victory over Kingston. On next week’s SmackDown, we have a tag team match between The New Day and team of Cesaro and Nakamura.

The long wait was over and Sheamus finally toasted to Jeff Hardy. The Celtic Warrior did not come out in the ring and gave the toast to Hardy from WWE network instead. Hardy was hold up in the ring with a bartender and he pretended to drink before smashing the glass on bartender’s head and then hitting a Swanton bomb on him as the show ended.

Matt Riddle showed the WWE Universe why he deserves to be part of WWE Smackdown roster. He battled against John Morrison and got the victory over him in a jaw-dropping contest which lasted for more than twenty minutes. Riddle’s victory sent the message to King Corbin who interrupted him earlier in the show.

Finally, the Intercontinental Championship match took place in this latest SmackDown episode and AJ Styles got the impressive victory over Gulak and retain his IC title. Gulak gave a tough fight to the phenomenal one’ but failed to hold him till the count of three. And Styles once again proved why he is called the phenomenal one.