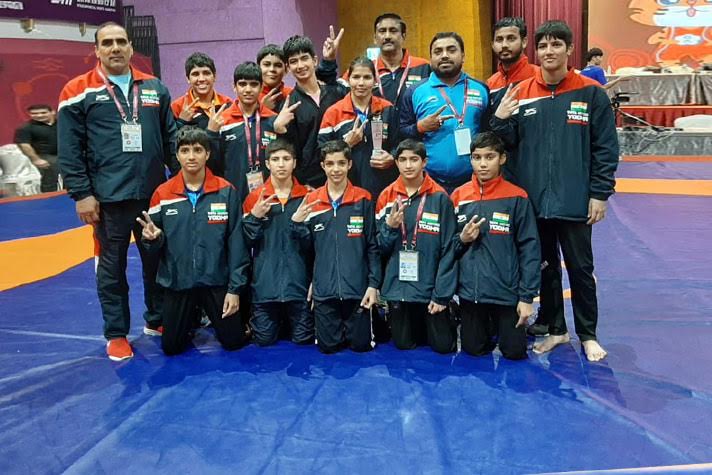 India’s superb show continued on the last day of the Under-15 Asian Wrestling Championships in Taichung, China as they added five gold medals as well as five silver medals to finish their campaign on a high with a rich haul of 28 medals, that includes 13 gold, 14 silver and 1 bronze.

The performance also ensured that India finish with the maximum number of gold medals in the championship.

Led by 2019 Cadet World Championships bronze medallist Deepak Chahal, the freestyle grapplers continued their heroics to capture four gold medals on the final day of the competition. While Chahal won the gold in 75kg, Haryana’s Vishal (62kg), Sonipat’s Sagar Jaglan (68kg), & Madhya Pradesh’s Jatin (85kg) were the others who finished on the top podium. Most impressive of the lot was Sagar Jaglan in 68kg. Down by 6-1 against Bexultanov Yerkhan of Kazakhstan, Sagar made a remarkable turnaround in the last 20 seconds to win the bout 7-6 and gold for his country.

India’s domination in the championship can be gauged from the fact that all 10 Indian wrestlers in the freestyle category finished on the podium. This resulted in India finishing on top of the team rankings for the first time with 225 points. Kazakhstan finished 2nd and Japan at number 3.

India continued to prove their mettle in Greco-Roman category by winning 1 gold and 2 silver on the final day. Harsh remained unbeatable in 44kg category to capture the yellow metal. With 204 points, India finished second behind Kazakhstan who accumulated 230 points.

The exploits of Indian girls also continued on Sunday with Komal (42kg), Sheetal (46kg) and Dhanshri Fand (50kg) contributing three silver medals to the tally. Japan thus pushed India to the second spot in the U15 Asian Girls team rankings. While India finished with 212 points, Japan was top of the table with 225 points.

Log on to on to wrestlingtv.in for all the latest updates on the sport and follow it on social media handles – @Wrestlingtvindia/ (Facebook), @wrestlingtvIND (Twitter) and @wrestlingtv.in (Instagram).  Watch the Greco-Roman Wrestling World Cup LIVE on WrestlingTV.in from Tehran, Iran from November 28.