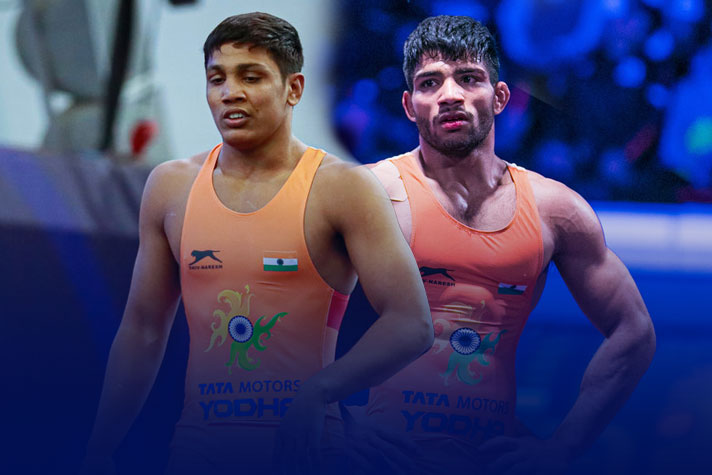 Two of the biggest stars of the Indian wrestling (Kushti) Sushil Kumar (74kg) and Rahul Aware (61kg) decided to give Tata Motors Senior National Wrestling championships in Jalandhar a miss resulting in two of the biggest future stars emerging in the categories. U23 Silver medallist Ravinder in the 61kg category and Gaurav Baliyan in 74kg were quick to pin the opponents to win there first senior national gold medals in Jalandhar on the day 1 of the competitions.

A month after winning the silver medal at the U-23 World Championships, Ravinder came into the Nationals as the favorite to win the 61 kg title. Senior world championship bronze medallist Aware decided to skip the nationals but Sonaba Tanaji, Suraj Kokate and Rohan from Haryana were there to pose the challenge. But the 23 year old Ravinder who was out of the game for two years due to knee surgery proved to be too good for the competition. Ravinder won all his five bouts including the final by the technical superiority.

“I have won senior national gold for the first time. It will be a great boost for me. I will now prepare for the tougher challenges ahead”

Rahul Aware is the undisputed champion in this category. But the rapid strides Ravinder is making in the last few months will make him great challenger to Aware’s domination in the category.

Gaurav Baliyan the most impressive

If someone should be given the most impressive wrestler on the day 1 of the competition. It should be without any doubt 18 year old Gaurav Baliyan from Uttar Pradesh. Just few months back Baliyan won U23 National championships in Shirdi and now this youngster has Senior National gold in his kitty.

Baliyan was super impressive in the 74kg as he upset the favorite Praveen Rana in final to win the gold medal. In a thrilling bout, Baliyan made a comeback from being 2-4 down to win 5-3 to become one of the youngest winners in this edition of the National Championships.

“I just wanted to wrestle in my sense and not think too much,” Baliyan said. “It was a great competition for me and to win the gold is great in a tough final. Overall, it was a great tournament.”
Baliyan was impressive right from the start. Ladu Jat of Rajasthan was no match for him before he moved past Arjun Yadav of Railways. Tougher competition was expected in the quarter-finals and semi-finals but Baliyan was up for the challenge. Haryana’s second-best in the category and junior Asian champion Parveen Malik was humbled 12-2. Mukul Mishra met the same fate as Baliyan roared into the final.

74KG is the same category where Indian wrestling’s (Kushti) great Sushil Kumar ply’s his trade. It will be interesting to see how the youngster pose the challenge to the greatest of the Indian wrestling (Kushti).